Blind Boys of Alabama Go Down to New Orleans 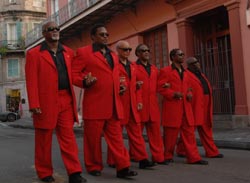 Spending five decades on the black gospel circuit is called paying your dues, but now that mainstream success has come for the Blind Boys of Alabama, they aren’t thinking about paying themselves back. As they sing in their new CD “Down in New Orleans,” “you got to live and give.”
The disc, recorded in New Orleans with local musicians was an attempt to spread their recently abundant wealth where it’s needed most, and remind the rest of us that Katrina is still a daily reality for Louisianans. Oh, and it’s a rare and joyful blend of traditional gospel and New Orleans blues.

Introduced to rock audiences by Tom Petty in 2001, the Blind Boys have increasingly incorporating tunes by the likes of the Rolling Stones, Ben Harper, and Tom Waits into their recordings. The notion seems to be that they can bring more people to gospel—and the Gospels—by expanding their definition of sacred music.
The new disc continues the expansion with fascinating collaborations with bedrock New Orleans acts like Alain Toussaint and the Preservation Hall Jazz Band. Neither gospellers nor jazzistes yield much to the other, letting the pumping rhythm of traditional numbers like “Uncloudy Day” and “I’ll Fly Away,” play interestingly with the punctuated oompah of the Dixie sound. As a celebration of New Orleans, it’s fittingly haunted, as if by the work left to do to bring the city back.

'This American Life' DVD: The Valedictorian of Reality TV
archives most recent
More from Beliefnet and our partners
previous posts