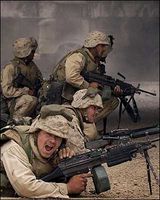 It’s become a truism that Americans don’t want to hear about the Iraq war, especially not in their entertainment. Last week Noah Feldman led off the New York Times Magazine with a piece bemoaning the lack of Iraq discussion among the presidential primary candidates, and as an aside repeated the CW about the conflict: “The film studios could barely get a Middle East movie to break even in the past 12 months (‘In the Valley of Elah,’ anyone?).”

The assumption here, and I think a mistaken one, is that we don’t care about an real-world event because we don’t flock to the theaters to watch fictional renderings of them. The most important and lasting films about Vietnam (“The Deer Hunter,” “Apocalypse Now,” “Coming Home”) didn’t begin to appear until four years after the fall of Saigon, and even then they opened wounds many would have seen kept closed. Just because we don’t presume to know what the Iraq war means to us yet, or what Brian DePalma and other directors say it should, doesn’t mean we don’t care.