What ‘The Golden Compass’ Really Says About Pullman’s Belief

This is the second in a series of blog posts about “The Golden Compass” by guest blogger Tony Watkins, author of “Dark Materials: Shedding Light on Philip Pullman’s Trilogy ‘His Dark Materials.‘” 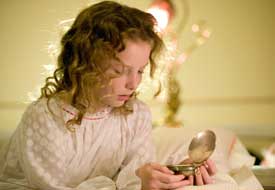 I wonder how aware Philip Pullman is of the deep irony at the core of his trilogy, “His Dark Materials,” the first of which, “The Golden Compass” is releasing on Friday as a movie. Almost everybody who’s ever heard of him knows that he’s an atheist and a humanist. He has repeatedly insisted that “there ain’t no elsewhere”–this physical universe is all there is, there are no transcendent dimensions of reality, and there is no supernatural being outside of space and time. To be fair, Pullman does acknowledge that there may be one, but he insists that he’s seen not the slightest shred of evidence. He recognizes that technically he’s an agnostic but, like so many, he has a default presumption that atheism is true.

Pullman teeters on the edge of the common trap of imagining that the burden of proof is entirely on the believer: Those who believe in God must present compelling evidence of his existence, or he will continue to believe that such a being cannot exist. Yet the belief that we inhabit an entirely materialist universe is equally a truth claim in need of evidence to support it. The default position, if neither side was to produce evidence, must be to say that we don’t know–which is why I give Pullman the benefit of the doubt, as it were, and say that he’s on the brink of falling into the trap.

Where is the irony? It’s this: A man who claims to be a materialist (a believer in a purely physical universe) writes a story revolving around a cosmic, superhuman intelligence that communicates, guides, and directs in a remarkably god-like way. “Dust” is a brilliant idea which provides the central narrative tension to “His Dark Materials,” and which propels the narrative forward by guiding Lyra through the alethiometer, her truth-telling device. “So many worlds, but common to them all is Dust,” we’re told by a voiceover early in “The Golden Compass.” We’re also told that Dust was here before people, ice bears, and other conscious beings. Dust seems to be the most fundamental reality in the universe.

This seems to be a very spiritual idea. It certainly reintroduces some aspects of God back into the picture. But does that mean that Philip Pullman is really telling a profoundly spiritual story? Perhaps, in its broadest sense, given that some humanists speak of spiritual dimensions to life when they refer to fundamental questions of human self-consciousness, purpose, and identity. However, to say that Pullman is telling a spiritual story runs the risk of suggesting that there is a deliberateness about it; even, perhaps inferring some actively spiritual motivation and relativizing his atheist claims.
Inferring others’ motivations is problematic, because we can never really know what goes on in someone else’s head. Even statements which apparently announce the motivation may be misleading, as I suggested in my previous article, especially when those statements are inconsistent. Nevertheless, someone’s motivation arises out of their worldview, so reflecting carefully on the worldview helps to suggest what motivations are likely or possible.
Pullman’s worldview is well documented from interviews: This world is all there is; human beings therefore have just one life to live, and we should learn to live wisely and responsibly in order to make the most of it, both for ourselves and for others. It is unlikely, therefore, that Pullman views Dust as being in any way spiritual. Dust is physical. It would appear that, for Pullman, Dust was a way of dealing with religious issues while affirming a materialist view of reality. This, surely, is the reason why the shadow particle researcher from our world is Mary Malone, the physicist who has renounced belief in spiritual reality.
Despite all this, though, the irony remains in that Philip Pullman the materialist intuitively reached for models which encapsulate features of the very worldview he denies so strongly. He has said that he doesn’t believe in the kingdom of heaven, and yet “we need all the things that heaven meant, we need joy, we need a sense of meaning and purpose in our lives, we need a connection with the universe, we need all the things that the kingdom of heaven used to promise us but failed to deliver.”
My contention is that such things are inherently spiritual in origin and, like moral values, require the existence of a God beyond the physical realm. Pullman objects to this idea and yet unwittingly, it seems, stumbles into tying them up with something that is at least reminiscent of God. Perhaps it’s harder to jettison such concepts, such realities, than Philip Pullman realizes.