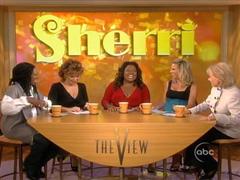 Huffington Post’s Danny Shea took “The View’s” Sherri Shepherd to task yesterday for claiming that Christ predated the ancient Greeks during a discussion of philosopher Epicurus on the gab fest.
“Naturally, talk soon migrated to the topic of religion, and Sherri ‘I don’t know if the world is flat’ Shepherd came out to play,” writes Shea. “More specifically, to spew ignorance and a complete lack of understanding of basic world history!”

“Discussing whether Christians were around during Epicurus’ time (Epicurus lived from 341-270 B.C.), Sherri chimed in, ‘[The Greeks] had Christians ’cause they threw them to the lions.’”
While it is somewhat surprising that a conservative Christian such as Shepherd would not know that it was, in general terms, the Romans, not the Greeks, that staged games in which Christians and other captives were torn apart by wild beasts, I think Shea should save his indignation for the American educational system which has evidently failed Ms. Shepherd.
When Shepherd tells co-panelists Whoopi Goldberg and Joy Behar, who are attempting to lay out a basic timeline, that “Jesus came first before them,” she seems to sincerely believe what she is saying. A friend of mine feels that Shepherd is “like many evangelicals, using ‘Christian’ in a very particular, hermetically sealed, self-promoting fashion, where the world begins and ends with the people who call themselves ‘Christians.’” While Shea doesn’t directly come out and express the same thought, it is clearly implied.
But, in this case, I don’t think it’s a theological stance, but rather actual ignorance. And I mean that in a nonjudgmental way.

Sadly, Shepherd is by no means alone. If you were to poll typical Americans about basic ancient timelines, you would probably get similar responses. Heck, many Americans have a difficult time identifying events that happened in the last decade and places closer to home.
A 2006 National Geographic-Roper Public Affairs Geography Literacy Study found that two-thirds of Americans aged 18 to 24 could not find Iraq on a map, even after three years of conflict and extensive, daily media coverage.
More disturbing is that fact that “half or fewer of young men and women 18-24 can identify the states of New York or Ohio on a map [50 percent and 43 percent, respectively].” You can’t find Ohio on a map, but you should know when Ovid lived?
It’s terribly disheartening that many Americans have little understanding of ancient history, and it’s even harder to explain to them that scholars believe that Christ was actually born a few years B.C. (Before Christ). And with the term B.C.E. (Before the Common Era) replacing B.C. in most academic circles and texts, people are bound to get more confused than they already are.
Yes, it is frustrating to hear Shepherd mangle history, but I think Shea should look at the positive; when was the last time you heard a daytime talk show panel chat about an ancient Greek philosopher? Perhaps they should rename the show “The Forum.”
read next post