The Catholic League on ‘Golden Compass’: Why They’re Boycotting

Here at Idol Chatter, and throughout the media, there has been a lot of discussion about the Catholic League’s call for Christians to boycott “The Golden Compass” and the accusation by BIll Donohue, the Catholic League’s president, that the story is “selling atheism to kids.” Because the movie has sparked such a strong reaction from a lot of people, we asked Catholic League officials to articulate their views for Idol Chatter readers, and the following is their statement:

The upcoming New Line Cinema and Scholastic film “The Golden Compass,” based on the first volume of Philip Pullman’s trilogy “His Dark Material,” opens across the country this Friday. Pullman’s books are extremely anti-Christian, particularly anti-Catholic, and pro-atheistic. While the books’ depiction of the Church promises to be watered down for the film version (the director has admitted the studio feared the anti-religious elements would make the flick an “unviable project financially”), the fact remains that the movie will serve as bait to lure kids into reading the books. And as anyone who has read Pullman’s work knows, the books’ bigoted portrayal of a Calvinized version of the Catholic Church is not at all subtle–it is a full-on assault on Christian sensibilities.
Every character connected to the Church in Pullman’s series is a terror. Priests and bishops kidnap children, perform cruel experiments on them, murder at will, and burn witches. They are not working in the service of God, because in Pullman’s fantasy world, there is no god.

Pullman, and the studio, would have viewers believe the books are nothing more than an adventure story and an indictment of the “literalist, fundamentalist nature of absolute power, whether it’s manifested in the religious police state of Saudi Arabia or the atheist police state of Soviet Russia.” This is nonsense. Pullman has been shooting off his mouth for years, boasting “My books are all about killing God,” and “I am all for the death of God.” And yet now he claims he just wanted to tell a good story and encourage kids to be courteous. He even thundered to Newsweek, “To regard it [his storytelling] as this [Catholic League president Bill] Donohue man has said–that I’m a militant atheist, and my intention is to convert people–how the hell does he know that?” We know it because we’ve paid attention to the books and what Pullman’s said all along, such as “I’m trying to undermine the basis of Christian belief.”

Pullman and the studio, well aware that most parents don’t want to expose their kids to anti-faith, pro-atheistic screeds, can try to spin this all they want. The film may be toned down, but there is no doubt about the content of the books. After all, Britain’s National Secularist Society, American Atheists, and the fan website Bridge to the Stars are all upset that the most anti-Christian elements of the books will be missing from the film. They wanted to see faith maligned on the big screen, and they are sorely disappointed that they’ll have to miss out. Think what you will about such groups–you have to admire their honesty. They’re willing to admit that they like their bigotry raw.
The same cannot be said of others. Scholastic claims that its film is a celebration of “freedom, love, courage and responsibility.” New Line has been rather tight-lipped about the controversy (the studio has shifted the burden of the defense onto the actors). Donna Freitas, who teaches at Boston University and blogs here at Beliefnet, is likely Pullman’s biggest cheerleader. Inexplicably, she gushed that the film is “a thrilling, cutting-edge work of Christian theology.” This despite the fact that one of the trilogy’s heroines, an ex-nun, goes so far as to state, “the Christian religion is a very powerful and convincing mistake, that’s all.”
Along with urging parents to boycott “The Golden Compass” and to refrain from buying the books as Christmas gifts, the Catholic League has been running a public awareness campaign about the His Dark Materials trilogy. Our booklet “The Golden Compass: Agenda Unmasked” tells readers everything they need to know about Pullman’s books and the man’s aims. And they don’t need to take our word for it–we’ve quoted extensively from the trilogy, from literary critics, and from the author himself.
As usual, we’ve heard all sorts of charges that we are trying to censor the film and the books. This is absurd–not only do we lack the power to censor (after all, we’re not the government), we have no desire to do so. We’re simply exercising our own First Amendment right to speak up about these books. That Pullman and his cronies are so angry over this is telling. Are they afraid of the truth coming out?
For Idol Chatter’s complete coverage of “The Golden Compass,” click here. 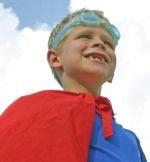 Who Is Your Hero?
archives most recent
More from Beliefnet and our partners
previous posts