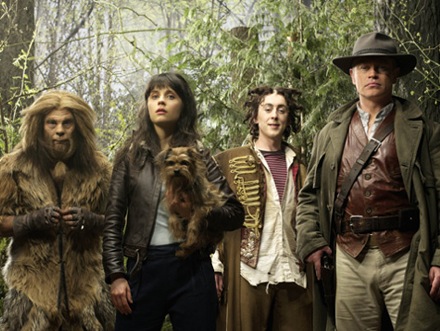 Dateline: Kansas. DG lives with her family on a farm, wears a pinafore-style apron as her work uniform, wears her hair in ponytails and rides her (motor) bike. And there’s a storm coming. And that storm, in addition to being the cyclone we’re used to, is also a legion of “longcoats” — soldiers from “the other side” who chase DG and her parents from their house into the eye of the storm. DG (the eternally wide-eyed, child-like Zooey Deschanel) wakes up in a land that has two suns and asks “where am I”? And suddenly finds herself surrounded by little people who identify themselves as “resistance fighters of the eastern Guild.” (I think that must be the Lollipop Division.)
DG is Dorothy Gale, in case you haven’t guessed. That’s right; SciFi has taken my beloved Wizard of Oz, with its messages of home and looking for your heart’s desire, and edged it up for sci-fi fans of the technology age, with “Tin Man,” a minute-by-minute shoutouts/callbacks/homages to every show or movie SciFi has ever aired (or admired) before.

Back in what seems like the Ewok Village on Endor, DG’s put in a cage with “Glitch,” (Alan Cumming), a former civil servant who’s got a zipper on his head where he says his brains were stolen (an effect that’s cool but also leaves Cumming looking very much like Sweeney Todd’s brother) who says he’s called that because sometimes his synapses don’t fire right. This is “the O.Z,” the outer zone, which used to be “a piece of Heaven until (evil sorceress) Azkadillia got her claws into it.”
Turns out the “people” DG thought were her parents were actually “nurture units,” robots programmed to be the best parents they could be. But their deeper purpose was to tell her the stories of her world and bring her back to the O.Z. to find her real mother. But to find out where her mother is, she’s got to see the “Mystic Man,” (Richard Dreyfuss, as Mr. Holland sans his Opus and with an apparent drug problem). Or as the evil sorceress Azkadellia (Kathleen Robertson) puts it, “the little bitch has gone to see the wizard.”
DG and Glitch rescue a man from inside a metal scuba suit (think of the kind that exists in miniature in many a fish tank) who’s been forced to watch a holographic rerun of his family being tortured. His icy glare and seemingly heartless attitude goes along with his name (Wyatt Kane) gun and wild west aphorisms (“drop it, or I’ll blow you into next week”), and (greetings, Dr. Jones…) a brown fedora. And then the group rescues a lion from a tree, where he’s been marked as dinner for something that looks like it’s half-Orc and half-raptor. The lion, whose name is “Raw,” is also a healer (like Leo from “Charmed”) and a psychic (think Samantha Morton in “Minority Report”), who reveals that the guy from the metal suit used to be a “Tin Man,” which is what they used to call policemen. The group goes off on an expedition not dissimilar to the Hobbits’ excursion to Mount Doom. Oh, and later, at a nightclub not unlike Mos Eisley Spaceport, the lion wears a brown cloak like Obi-Wan Kenobi.

So yes, it’s a bit derivative. But there’s something comforting about the familiarity, like its a family reunion of archetypes, sights and even music that we’ve heard before, even though the story at its center — the beloved Wizard of Oz — seems secondary.
At the end of tonight’s episode, the first in the mini-series, we’ve discovered that DG and the evil sorceress are sisters, and the eponymous Tin Man had been shot by the evil agent Zero, dropping through a glass window into a frozen lake and through the ice to an assumed watery grave; and DG, Raw and Glitch were in the custody of the sorceress. Now what? Well, the name of the series is “Tin Man,” so I think we can safely assume he’ll be back. And since it’s a mini-series, I’m expecting some redemption and reunion at some point. The series continues tonight (Monday) at 9pm, but if you missed the first episode and want to catch up, check it out at 7pm.

read next post
The Catholic League on 'Golden Compass': Why They're Boycotting
archives most recent
More from Beliefnet and our partners
previous posts