This is the last in a series of blog posts about “The Golden Compass” by guest blogger Tony Watkins, author of “Dark Materials: Shedding Light on Philip Pullman’s Trilogy ‘His Dark Materials.'” 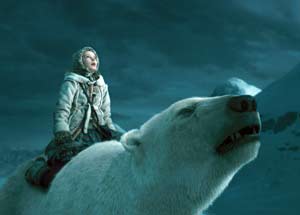 Eyebrows are sometimes raised in my direction when I say that Philip Pullman’s “His Dark Materials” trilogy is not something that Christians should be afraid of, run away from, or prevent their children from reading. Rather, I think it’s something that we should engage with seriously. I understand the need to protect children from unhelpful influences, but I don’t believe that we should necessarily stop them watching the film or reading the books.

The key thing, for me, is whether or not they’re ready for it. The problem is that we have to do more than protect children while they’re young; we also need to equip them to deal with the world and its frequent hostility to people of faith. My conviction is that I need to help my boys understand and respond to the challenges, not insulate them. After all, being denied access to something can greatly increase its attractiveness.
So I do want them to read “His Dark Materials” at some point. I want them to appreciate the breadth of a great storyteller’s imagination and the quality of his writing. And I want them to feel the force of the challenges this story presents and to be able to respond to them intelligently. Some of them are significant, but nothing that they won’t soon meet in the school playground.

The most obvious of these challenges is Philip Pullman’s view of the nature of reality. People often lament that he kills God off in “The Amber Spyglass,” but he’s only able to do this because of something more fundamental: He redefines “God” as merely a physical being in the latter stages of decrepitude–a fraud, an imposter, a delusion. Pullman believes in the idea of multiple universes, but not in any spiritual or supernatural dimensions. As he often says, “There ain’t no elsewhere.” So God, angels, ghosts are all made of matter like everything else, but rather insubstantial and thin. They are made of Dust, the particles of consciousness that permeate reality.

“God died a long time ago,” Pullman exclaims. What he means is, “It’s as if God has died. That’s the feeling I have.” The idea of God is redundant. He insists that “God” is nothing more than a metaphor: “I don’t expect Christians to see God as a metaphor, but that’s what he is. Perhaps it might be clearer to call him a character in fiction, and a very interesting one too: one of the greatest and most complex villains of all.” For Pullman, everything is either physical or an abstract concept.
My response to this is one that riles Philip Pullman: If there is nothing beyond this physical universe (or multiple universes, if you like; it resolves nothing and creates more problems than it solves), then there is no solid basis for objective morality or truth. There must be something beyond the system to guarantee such things.
If there is nothing more, no God, we are here through processes which are either entirely deterministic or utterly random. If every thought in my mind is a product of deterministic or random processes, how do I know that what I think is true? I cannot. Pullman is adamant that I am deluded, and that he is not. But we cannot know, since my brain generates my beliefs and his generates his. There is no objectivity because there is no true external reference point.
If there is nothing beyond us, how can we discriminate between one person’s set of moral values and another’s? Pullman’s values are similar to my own, but if he’s right we cannot claim any objectivity to valuing truth, kindness, self-sacrifice, and moral responsibility–they are merely relative human ideas. I maintain that the values by which Pullman lives are derived from a Christian worldview, the inheritance of his upbringing. He goes up in smoke at this: “I’m amazed by the gall of Christians. You think that nobody can possibly be decent unless they’ve got the idea from God or something.” But he misses the point. It’s not that only Christians can be moral, but the question is, why is there any sense of ought, any moral value, in a world without God?
Pullman is remarkably optimistic about human nature and our ability to make a better world, but our track record is diabolical. Total autonomy from God is not the way to true freedom and wisdom, but the ultimate delusion. We are most fully human when we live in relationship with God and within his moral framework. This is the most crucial thing to discover in life, and reading and discussing “His Dark Materials” together will be a powerful way of exploring it with my kids.
You can read more of Tony Watkins’s thoughts on “The Golden Compass” and find resources about the movie here. For Idol Chatter’s complete coverage of “The Golden Compass,” click here.