The Writers Strike: You Can Make A Difference 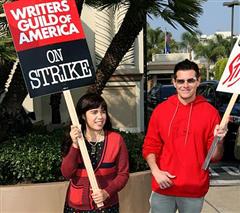 One of the reasons I am proud to be associated with Beliefnet and this blog is that the Beliefnet community recognizes and discusses issues like the ongoing Writers Strike in the context of social justice as well as spirituality. I started the discussion on November 1st when the strike was looming, and editor Michael Kress has done a fabulous job in providing additional thoughts on the real-life implications of the labor dispute on the striking writers. But now, I want to take time to challenge you to become involved in expressing your support for the writers.
If you have ever been inspired by a single moment on the small or big screen in any way this year, perhaps you could take a moment to give thanks this week by going to the United Hollywood blog and joining their clever Pencil2MediaMoguls campaign to let producers and executives know you support the writers.

United Hollywood, one of the best sites for strike coverage, has taken a page out of the
“Jericho” fans playbook (remember when they sent truckloads of nuts to CBS to protest the show’s cancellation and it worked?) and decided to become creative in sending a message to the studios. With the Pencils2MediaMoguls campaign, for only one dollar you can send a box of pencils to a mogul as part of a petition to demand that the media moguls bargain in good faith and create a fair deal with the Writers Guild of America. You can even send the pencils in honor of your favorite TV show. ( I sent several boxes in honor of “House.”).
Hopefully semi-trucks filled with millions of pencils will make their ways to the offices of these execs and they will realize that audiences still want well-crafted stories — written by writers who work hard at their craft and deserve to be paid for it — that challenge us, make us laugh and even give us hope, and that we won’t settle for a plethora of mindless, dumbed-down, salacious reality programming just because it is cheaper to create and feed to the masses.
(And if you still aren’t convinced the writers strike really matters in terms of the ongoing culture wars, you should read the hilarious yet scathing look at the Writers’ Strike from an insider’s view, over at the blog of the amazingly talented writing staff of the “David Letterman Show.” )