“Pierrepoint”: My Other DVD Pick This Week

Yes, my DVD choices this week reveal the variety in my movie tastes as well as perhaps the scattered, unstable nature of my brain. While I laughed myself silly watching “Chalk”, I was deeply, emotionally disturbed as I watched “Pierrepoint”, a gripping drama about capital punishment. Stylish yet gruesome, “Pierrepoint” examines the life of England’s last official hangman, Albert Pierrepoint, as he tries to separate his life from his work, with his soul ultimately paying the price. “Pierrepoint” is not for the faint of heart, but it is my other DVD pick for this week.

Albert Pierrepoint is not an evil man or a blood-thirsty one, either. He is simply a grocery delivery man before he is convinced to step into the shoes of his father and uncle by becoming an executioner. However, Albert exceeds at his job above and beyond those family members before him. He’s calm, steady, efficient, and humane as he analyzes the height and weight requirements for each and every hanging. He doesn’t tell his wife what he does for a living at first, and he is detached and aloof from his co-workers. The implication seems to be that if he can just compartmentalize his unsavory occupation from the rest of his life, he won’t be scarred by it. In the end, this just isn’t the case, even as he participates in hangings of Nazi war criminals, his life is deeply affected by the culture of death that surrounds him.
I don’t suppose a movie like “Pierrepoint” will do much to advance the moral debate over capital punishment, in the same way I am not sure that a movie like ‘Vera Drake'” really furthers a debate about abortion, but it is a fascinating character study, all the more powerful if examined in light of the death penalty in our present culture. 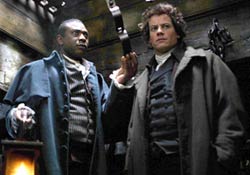