With “The Nativity Story” not exactly turning into a box office bonanza and the adaptation of Anne Rice’s novel about the early years of Jesus hitting some problems in production, you might think Hollywood would take a break from movies about the life of Christ. But Hollywood in all of its wisdom seems to think the way to tap into the Christian market is to green light projects that will put a revisionist spin on the life of Christ.
Variety reports that the director of the hugely successful self-help DVD “The Secret” will be the wunderkind who will direct “The Aquarian Gospel,” a movie that fills in the “missing years” of Jesus by having Jesus wander through India, live with Buddhist monks and Hindu mystics.The producer, William Keenan, has been quoted as saying that “Indian religions and Buddism…played a big part in Christ’s thinking.” Better yet, the movie will also feature a princess who may or may not be a love interest for Jesus.

A German filmmaker is also looking to India as he adapts “The 13th Disciple,” a story about the evil twin brother of Jesus. The movie will be shot in India and will feature various religious sects there as it tracks the years of Jesus’ life not recorded in the Bible.
Okay, so I don’t really believe these movies are going to be marketed to evangelicals at all. They are simply going to create controversy for controversy’s sake in an effort to sell a few tickets. But I think there is one real question worth asking regarding both projects: How would Muslims and Buddhists react to a wildly imaginative, revisionist movie about Muhammad or Siddh?rtha Gautama and would their protests be judged differently than those of Christians who choose to protest movies that disrespect the tenets of Christianity? 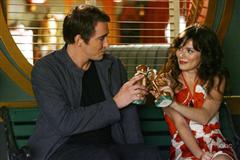 Abs(tin)ence Makes the Heart Grow Fonder? The Top 5 Television Shows Putting the Romance Back Into Relationships
archives most recent
More from Beliefnet and our partners
previous posts