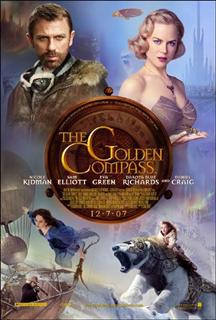 Bill Donohue, president of the Catholic League, is at it again. Known for his hard-hitting attacks on, well, just about anything and everything (including Miller beer), Donohue has decided to settle on one big target for the time being. On October 9, Donohue and the Catholic League launched a “nationwide two-month protest of [Philip] Pullman’s work and the film.”
The film in question is, of course, New Line Cinema’s adaptation of “The Golden Compass,” the beloved first book in Philip Pullman’s “His Dark Materials” trilogy.

In addition to calling Pullman a “militant atheist,” Donohue rants:

The trilogy, His Dark Materials, was written to promote atheism and denigrate Christianity, especially Roman Catholicism. The target audience is children and adolescents. Each book becomes progressively more aggressive in its denigration of Christianity and promotion of atheism: The Subtle Knife is more provocative than The Golden Compass and The Amber Spyglass is the most in-your-face assault on Christian sensibilities of the three volumes. Atheism for kids. That is what Philip Pullman sells.

The first question we should be asking Mr. Donohue: has he even read the books? And the next question: how familiar is Mr. Donohue with Catholic theology?
Most of Donohue’s argument comes from his belief that “His Dark Materials” is an atheist manifesto–“atheism for kids” as he puts it. Pullman is a well-known atheist. But anyone familiar with even a little theology can see God lurking throughout this wonderful, imaginative adventure. And anyone with a Christian background will find that Pullman’s trilogy is rather sparkling with good Christian virtues like the big three–faith, hope, and love–not to mention lessons about justice, temperance, prudence, and courage.

And we’d want to keep our kids from these values because…..Hmm. I can’t think why we would.
Oh. Because of the death of God scene in “The Amber Spyglass.” But then, let’s not confuse God with Authority.
And, since Donohue claims: “We want an educated public. We want the parents to be able to decide for themselves,” then, in addition to parents considering whether or not they want to shield children from a trilogy replete with Christian values, maybe they might also want to open themselves to the possibility that Pullman’s bone to pick is not so much with God but with Authority–the kind of corrupt, institutional abuse that comes from absolute power. In the trilogy, Pullman’s God-figure isn’t even a God at all. He’s a false God, the first angel who fools everyone into thinking he is God because he wants to rein supreme over all creation. So really, “His Dark Materials” is a critique of abusive authority and corrupt institutions that hide behind the divine as they do their dirty work.
As a Catholic myself, who knows many other Catholics, not to mention fellow Christians of so many denominations, so wearied by our own respective abuse scandals within our faith traditions and home churches, I believe Pullman’s critique of abuse might come as a welcome message. A relief even. And it certainly makes Bill Donohue’s scare tactics seem more about maintaining the secrecy we Catholics have come to abhor, banning knowledge rather than opening ourselves up to it, and standing in the way of the transparency we so long for from Church hierarchy.
Why would we want to keep secrets from our kids? Wouldn’t that only implicate us? And wouldn’t a more prudent, just, and faithful approach be to let our kids’ imaginations wander where they may, and make ourselves available for those Big Questions when our kids begin asking them?
This is just the tip of the iceberg between Donohue, the Christian right, and Pullman. So more soon on the controversy. In the meantime, for an alternative side of the story, check out my new book that I happened to write on this very issue (!!) with my brilliant friend and fellow theologian Dr. Jason King, “Killing the Imposter God: Philip Pullman’s Spiritual Imagination in His Dark Materials (Amazon or Barnes & Noble).” And if you really must, see and hear Bill Donohue rant about Pullman here.

read next post
Video Interlude: SoCalled's "You Are Never Alone"
archives most recent
More from Beliefnet and our partners
previous posts