Mute Math: Is It Christian Music?

A Burn or Burn profile of Mute Math almost writes itself. This is a band whose lead singer once fronted Earthsuit, a band with crystal clear Christian credentials. This is also a band who sued its label, Warner, when the label’s Christian division marketed their music. And this is a band who–to their credit–has talked openly about the problem of being a bunch of Christian pop musicians who want to sing for audiences more diverse than your neighborhood Baptist youth group. 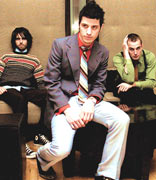 This is also a band with a hit song and a MTV video that is becoming a cult favorite. The lyrics to “Typical” could be about a thousand situations, but to my Burn-or-Burn-ing ears, they sound like the story of a Christian band wanting to become a regular band:

Come on, can I dream for one day?
There’s nothing that can’t be done

But how long should it take somebody

Before they can be someone?
Cuz I know there’s got to be another level
Somewhere closer to the other side
And I’m feelin’ like it’s now or never
Can I break the spell of the typical?

For Mute Math, CCM equals “typical” and mainstream music equals “the other side”–and being “someone” means being someone more than a Christian rock star.
Then there’s that Michel Gondry-esque video for “Typical”, where the song is delivered forward but everything happens backward. It’s artfully done–check it out–and it’s a fabulous metaphor for a band who wants to push themselves along creatively and professionally, but also feels pulled back by their Christian industrial pasts. The video is as disorienting as the experience of being Mute Math, or, for that matter, the experience of being a Mute Math fan. Do we listen to the music, or do we watch what’s happening to the band? It’s almost impossible to do both at the same time.

Mute Math has, inevitably, been knocked by sources Christian and non as they’ve finagled their way out of the Christian music industry. But they seem to have pulled it off. Last week, they rocked David Letterman (John Mayer called it the Letterman “appearance of the year”) and their fan base is clearly growing.
As for me, I’m won over by Mute Math’s openness in talking about the struggles of being Christians who want to make music for more than just their fellow Christians. They haven’t shed the faith; just the faith industry. That distinction makes all the difference.
So, I say–burn ’em: Download the album and add “Typical” to that “Summer ’07” mix CD.
read next post