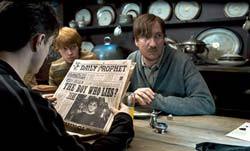 As the days crawl by for millions waiting on the release of The Final Book, there are those out there threatening to destroy our dreams of flying golden snitches and dancing chocolate frogs.
Who are these evil people, worse than Death Eaters?
They are the Spoilerists–those determined to “leak” parts of Deathly Hallows to fans blind-sided enough to read (and believe) them as part of the J.K. Rowling canon.
Horrible things have happened around the release dates for past books, usually from those who claim they’ve gotten their hands on book excerpts.

Two notable events from the last book release include copies accidentally being sold before their release date and a t-shirt revealing the death of Dumbledore.
This time around, the spoilerist frenzy around the last book has gotten worse. First, a hacker claimed to have broken into the Bloomsbury computer system and stolen the “Deathly Hallows” manuscript. Then, scanned images of various chapters appeared on the internet. And now, copies of the book have been sent before the release date (again).
Why are people intent on ruining a pure, happy moment readers have looked forward to for two years? In a gotta-have-it-now world, some of us seemed to have lost the simple joy of anticipation and the satisfying rewards of waiting. Instead, for some there is an unhealthy focus on gaining notoriety by ruining hope, while for others there is an unhealthy focus on allowing their hopes to be ruined.

I have to admit that in the past my impatience lead me to read countless movie reviews before seeing the movies, and I would read every nugget of theories before reading the books. Articles that I thought would help me enjoy the movies and the books more ended up marring my Harry Potter experiences, deflating and dulling my child-like happiness, clogging my own mind so there was little room for my own thoughts.
This time around, I stopped reading movie reviews; I allowed myself to be surprised and to be entertained–and I had the best Harry Potter movie experience. Also, I am staying away from reading threads to all spoilers about the last book. A Word of Caution: Certain news articles not only include links to spoilers but talk about them in detail.
After all, fans have already come this far in their countdown to the book release, so what’s a few more hours, a few more days? For true Harry Potter fans, good things will come to those who wait. So follow JK Rowling’s advice on her website and Stay Away from Spoilers!

Homer vs. Pagans
archives most recent
More from Beliefnet and our partners
previous posts