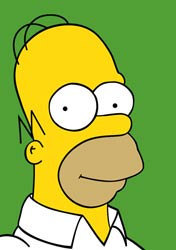 In a field north of Dorchester in Dorset, Britain is a chalk drawing known as the Cerne Abbas giant–a fertility symbol with a giant phallus. As it is said in the reliable book of Wikipedia, “For hundreds of years it was local custom to erect a maypole within the earthwork about which childless couples would dance to promote fertility, and even today childless couples are known to visit the site in order to copulate in the hope that they might have a child.” The site was also visited in 2004 by “Sex and the City” star Kim Catrall.

But now, a worthy field opponent has appeared to challenge the giant to a duel in the name of sweet, sweet lovin’.
The challenger’s pate is shiny with the slick of verility. His rounded jaw, instantly hirsute the moment after shaving has been completed, is testament to his manliness. Belly … rounded like the Buddha; intelligence … unparalleled, in a certain unparallelable way. Garbed in the most minimal of tidy whities, he’s ready to whup ass and take names. His weapon of choice? A giant donut, sacriliciously outstretched in anticipation of triumph. He is Homer Simpson. And he’s just the man to take on the giant.
Cooked up as a publicity stunt to promote “The Simpsons Movie,” which is opening July 27th, the drawing is done in water-based biodegradable paint, which its creators said would dissolve in the next rain. Ann Bryn-Evans, joint Wessex district manager for The Pagan Federation, said in a bbc.com article: “We were hoping for some dry weather but I think I have changed my mind. We’ll be doing some rain magic to bring the rain and wash it away.” And this isn’t giant Homer’s first foray into advertising. He’s been used to promote such tasteful items as condoms, jeans, and bicycles.
Next match: the giant vs. Chef from South Park.
Plus, see Beliefnet’s top ten (plus one) religious moments from “The Simpsons” here.