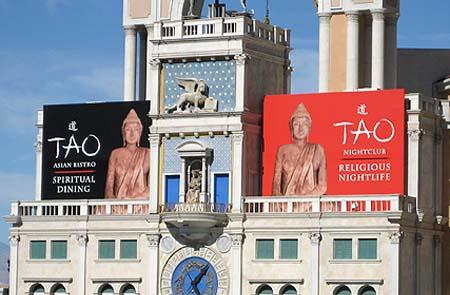 I had heard of Tao restaurant and nightclub in its New York City setting, so why should I have been surprised to see it in Las Vegas as well? Situated in the sumptuous Venetian hotel, Tao has two prominent advertising campaigns around town. One carries the, ahem, “sensual” promise, “Always a Happy Ending.” The other, unfurled in massive banners on the outside of the hotel itself, promises “Spiritual Dining” and “Religious Nightlife.”

Whatever on earth that means. I almost regret that my family and I didn’t stop in to find out. Almost.

Actually, I found Las Vegas to have an odd and surprising spirituality to it, some of which is genuine (there were Year of the Pig decorations in every hotel to honor Chinese New Year) and some of which, like Tao, is clearly co-opted and repackaged for Sin City. Tao’s marketing and advertising teams must have decided that the mere mention of the words “Religious” and “Spiritual” would make people feel they were going to experience something meaningful and real–although I’m not sure I have faith that my “religious” dining would have felt any more real than my stroll underneath the Eiffel Tower at the Paris or across the Grand Canal at the Venetian. It probably would have been delicious, but religious? Really?

But nobody should come to Las Vegas looking for “real.” They should come looking for fun, glamour, and everything that’s larger-than-life. There’s something kind of lovely in that willing suspension of disbelief, that awe at the grandeur of it all–even though it means nothing is sacred, even sacred religious traditions like Taoism.

Lest we forget, Las Vegas spirituality also has a dark side, that murky territory of superstition, intuition, and luck. The gambling culture is dependent on people having thoughts like “I feel it today,” or, “This slot machine is calling my name,” or “If I only play one more hand, I’ll win.” They’re counting on us to over-inflate our confidence in our intuition. And when I got home with $80 less in my wallet than when I’d arrived, I knew I’d taken the bait.

But hey–life is a gamble. And Las Vegas gives us the chance to revel in that truth with relatively low stakes. It lets us play with risk in the context of entertainment and enjoyment, rather than the stress and worry that accompany the bigger risks we take in life back home. That’s what I call a vacation.