Beyond Sacrifice in ‘Beyond the Gates’ 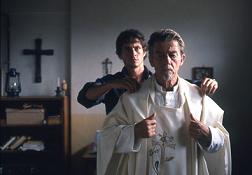 In 1994, there were very few safe havens for the Tutsi people of Rwanda when the violent rebels of the Hutu race began killing hundreds of thousands of Tutsi in a brutal civil war. The Ecole Technique Officielle, a school in the capitol city of Kilgali, was one of those few safe havens. In the film “Beyond the Gates,” currently in limited release, the school’s bloody chapter as part of that war is documented with thoughtful precision, offering additional insight into one of the greatest humans rights tragedies in recent history.

The film primarily takes place during the first few days of the war, when Belgian officials used the school as a military outpost of sorts to monitor the crisis, while the workers at the school gave refuge to a few thousand Tutsis hoping to avoid being slaughtered. Unlike “Hotel Rwanda,” which chronicled events from an African perspective, this film views the events more from the perspective of a British priest, Father Christopher, and a young, idealistic teacher, Joe. Together, they struggle to make sense of good and evil in a chaotic situation. As events unfold, Joe realizes he is woefully ignorant and unprepared to deal with the depth of this tragedy, while Father Christopher, amidst moments of doubt, is wearily resolute in his efforts to save any lives he can, at any cost.

“Beyond the Gates” has its flaws: The pace in the beginning is slow, and too many “important speeches” tell us what to think about the action as it is happens. However, the second hour of the film is gripping without being unnecessarily gory, and, in the end, it successfully poses important questions about the relationship between faith and sacrifice. Yet perhaps the most moving aspect of this film is the way the director bravely chooses to use survivors of the genocide in front of and behind the camera and then celebrates their stories during the end credits of the film.

In light of the ongoing events in Darfur, another cinematic look at the holocaust in Rwanda is, sadly, quite timely. For that reason alone, “Beyond the Gates” is worth viewing and discussing with those in your church community.

To watch an exclusive clip of “Beyond the Gates,” click here.