Faith Is More Than Skin Deep: The Failure of “Color of the Cross” 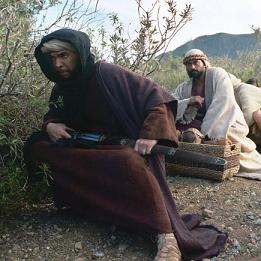 This is how they touted “Color of the Cross”: a film that will completely change the way we view Jesus and the crucifixion. But, instead of changing my heart, it hardened it for every second of the movie’s hour-and-29-minute runtime. The filmmakers took one too many liberties with Jesus and his disciples, from allowing Peter to slap Thaddeus on the butt to depicting a booty-call-esque relationship between Judas Iscariot and Mary Magdalene. In the midst of these liberties was a poorly written script which found Jesus speaking to a sheep–which happened to be black–and saying, “If only everyone were so accepting… Black sheep.”

So now the film is down for the count and still hasn’t given any factual evidence for why the filmmakers believe the Messiah was black. The weak evidence that was provided throughout was not enough to convince me. The most awful of the cases was that Mary and Joseph were turned away from the inn because they were black and the reason for Jesus’ crucifixion was mostly because he was black. Those two reasons seemed more like the modern-day cries of discrimination than a justification of the savior’s race in a time when people were set in their own ways.

I believe the real failure of the movie was trying to qualify the ethnicity of Jesus. I admit that there was a time in my life when I believed that Jesus was black, and then a time when I believed he was white, and now I am in the season–which I believe will outlast the others–where my mind is made up. It’s a highly personal issue, and I aim to keep it that way. It is up to each person to draw their own conclusion and not up to a movie to try and enforce a particular belief upon the masses and sell it as truth.

Faith is more than skin deep, and Jesus is more than skin deep as well. To try to put human understanding on something so supernatural is, frankly, almost belittling his existence–and we’ve already done enough of that. If we really want to talk about the real color of the cross, it was painted in the blood of a man, and last I checked, blood is red regardless of race.

read next post
Tyler Perry's Latest: Exclusively on Beliefnet
archives most recent
More from Beliefnet and our partners
previous posts