On this week in which we honor Dr. Martin Luther King Jr., I am growing tired of the disrespect that is tolerated in our culture–and even promoted–toward an individual who has had a far greater effect on the spiritual lives of countless Americans since even before the foundation of our country. His name is Jesus Christ.

A recent bit on “Late Night With Conan O’Brien” has brought this to light.

“Oh I love you Jesus, but only as a friend,” sang the “homophobe country western singer,” as introduced by O’Brien. “You touched my heart but I hope that’s where the touchin’ ends.”

And as if that weren’t enough, the bit went on:

“You’re always lookin’ over me
When I need a higher power.
But you better look at somethin’ else
When I’m in the shower.”

I can’t believe phones weren’t ringing off the hook and that O’Brien still has a job! Perhaps it’s because his show has become so irrelevant. Perhaps people of the Christian faith just don’t tune into him. Worse off, perhaps Christians are so used to their leaders being insulted (politicians, athletes, music and movie stars, etc.) that they don’t even notice when the Savior becomes the target of the same stuff.

A recent story at freerepublic.com brought this to light, and told about one leader who’s doing something about it. “The idea that anyone would think about the Son of God in this way is simply appalling,” said Douglas R. Scott, Jr., president of Life Decisions International (LDI) said. “The inferences that permeate the song are utterly disgusting.”

Mr. Scott has written to Kevin Reilly, president of NBC Entertainment, copying Robert Wright (Chairman of Universal) and Jeffrey Immelt (Chairman of GE). I hope more followers of Christ—and people who respect and revere God—to do the same.

It’s one thing to make fun of Christians, but a completely different thing to insult Jesus Christ. To do the former is levity and usually well-deserved. To do the latter is at the very least grossly irreverent, if not biting the hand we ask to feed us. 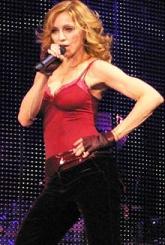