Along with many other critics and fans, I winced when I first heard the news that Sylvester Stallone was going to add one more chapter to the “Rocky” franchise. And the cynic in me became even more nervous when I began reading on the web about how Stallone was recruiting the church audience to rally support for the film. But “Rocky Balboa,” while not a great film, brings both Stallone and Rocky a little redemption for the cinematic embarrassments that were “Rocky III” through “Rocky V”(“Rocky II” wasn’t an embarrassment, just not as good as the original).

Almost as an acknowledgment that he sold-out one of the most beloved characters in American film history through the creation of the too many lame sequels to “Rocky,” Stallone makes almost no reference to anything that happened to Balboa in any of the films except the original. But when it comes to paying homage to the original movie, Stallone does it early and often. Balboa has returned to living in the old neighborhood, where he runs a small restaurant that draws people in because of his status as a local legend. He lives in a tiny, run-down home with two turtles and hangs with Adrian’s brother Pauley. Stallone even finds a clever way to bring a minor character from the first film back and turn that character into a major role in this story.

The one important person who is missing from this particular sequel, however, is the love of Rocky’s life, Adrian. Adrian died a few years prior to the opening action of this story, and it is that loss that spurs the rest of the movie. A grief-stricken and lonely Rocky is sleepwalkng through life feeling like a dinosaur, not only because of his age, but also because he is still trying to live his life by a value system those around him consider archaic. Rocky tries to find solace in his relationship with his son, who is uncomfortable with dad’s legacy, and he tries to find meaning in helping a single mom and her teenage son, but in both cases he is only moderately successful. But just as Rocky is becoming convinced once again that he still ain’t nuthin’ but a bum, he is persuaded to appear in an exhibition against the current boxing champ, the obnoxious and greedy Mason Dixon.

Does all of this sound familiar? Well, I think that is Stallone’s intention. He is not trying to reinvent Rocky this time around, but simply revisit his world to remind us that “it doesn’t matter how hard you hit, but how hard you can get hit and still move forward.” Yes, “Rocky Balboa’s” premise is slightly ridiculous, and the constant flashbacks to the original “Rocky” feel a little heavy-handed and overwrought, but Stallone gives a sweet, restrained performance, and hits all the right notes one more time as the underdog with the heart of gold.

And because I know readers are wondering, trust me when I tell you that Stallone ended the movie in such a way that there is no doubt that there will be no more Rocky movies in the future. In fact, it would have been nice if Stallone would have taken more time with the little twist at the end of the flick to give us more time to say good-bye to one of the most inspirational big-screen heroes of all time. 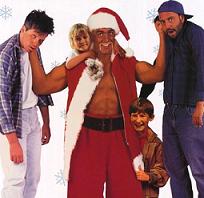