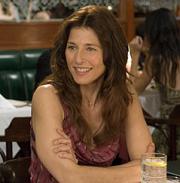 Indie film star Catherine Keener–known for her character acting in such cinema favorites as “Capote,” “Being John Malkovich,” and “The 40-Year-Old Virgin”–was just interviewed for the New York Times Fall Fashion issue. In “Being Catherine Keener,” Keener spills all to interviewer Lynn Hirschberg about how Catholicism has influenced her film career, including her thoughts on how being an actor is like being a priest: “Playing so many characters in so many films is a way to be in the moment. That was, to me, growing up Catholic, the appeal of the clergy–they address the moment. So, short of being a priest, I am an actor.”

Other interesting tidbits from the piece:

I still love anything connected to nuns. That’s why I love all of Yohji Yamamoto’s designs–they look like a nun’s habit, and if I had my way, I’d always dress like a nun. As a girl, I saw every movie with nuns: “The Trouble With Angels,” “The Miracle of Our Lady of Fatima.” I saw them all. I love the nun’s lifestyle: the quiet, the solitude. But then I realized they were subservient to priests, and I decided I wanted to be a priest. That’s when the trouble began. I desperately wanted to be an altar boy, and I stole a bag of unconsecrated wafers. They weren’t yet the body of Christ, but they were delicious. That was the first of my many run-ins with Catholic law.

How does Catholicism relate to show business?

Well, there is something about Catholicism that is both theatrical and pure, and movies can have that quality. There are other benefits to Catholicism: you grow up with a great sense of shame and hope and faith and naïveté.

And apparently, at least if you happen to be a girl, you grow up with creative ideas about how to be priestly without actually having to be a boy or an actual Catholic priest.