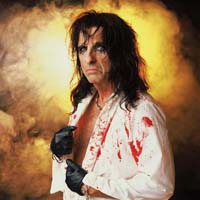 In the immortal words of Alice Cooper, “School’s out for Summer.” But Cooper, the heavy metal maestro, is making sure that the kids of southwest Phoenix will still have a safe place to go once school doors are closed. MSNBC.com, via the Associated Press, reports that Cooper’s Christian, nonprofit Solid Rock Foundation, “has begun fundraising efforts for a 20,000-square-foot teen activity center to be called The Rock, to be built at Grand Canyon University in West Phoenix.”

The former vincent Furnier spends most of the year in suburban Phoenix playing golf and working for his foundation, but realizes that it’s not all tee times and spa treatments for many of the area’s children. “People don’t lay in the sun in southwest Phoenix. There’s lots of shootings going, there’s lots of meth going on, there’s lots of gangs,” Cooper said. “In the middle of all that is a bunch of 12-, 13-, 14-year-old kids that can go one way or the other.”

Isn’t this the same heavy metal rocker whom pop culture lore says took his stage name after learning that he was the reincarnation of a 17th-century witch, Alice Cooper, while scrying on a Ouija board? Yes it is. And while Cooper wasn’t actually a witch in the past–the name came from his idea of an ax-wielding little girl– he did come from a long line of Christians. According to Wikipedia, Cooper’s grandfather was an ordained Apostle of the Church of Jesus Christ, his father was an ordained Elder, and Cooper has some distant French Huguenot ancestry.

The shock-rocker returned to his Christian roots in the 1980s when he was struggling with alcoholism, and is now interested in helping at-risk youth learn the value of “boundaries.” “Kids love boundaries. We used to fight against them. But in all reality, what we really did want was to know where we could go,” he said.

And not to worry, there will be plenty of rock at this teen center–rock climbing that is. The center will include a “recording studio, indoor basketball courts, rock-climbing walls, coffeehouse, game room, and concert hall.”

read next post
Mel's Mea Culpa: Help Me, Jews!
archives most recent
More from Beliefnet and our partners
previous posts