Criticized yesterday for an apology that was deemed “insufficient” and “unremorseful” by Abraham H. Foxman, the national director of the Anti-Defamation League, actor Mel Gibson released a full statement today asking for the forgiveness of the Jewish community for his anti-Semitic tirade during an arrest on DUI charges.

“There is no excuse, nor should there be any tolerance, for anyone who thinks or expresses any kind of anti-Semitic remark. I want to apologize specifically to everyone in the Jewish community for the vitriolic and harmful words that I said to a law enforcement officer the night I was arrested on a DUI charge.”

“I am a public person, and when I say something, either articulated and thought out, or blurted out in a moment of insanity, my words carry weight in the public arena. As a result, I must assume personal responsibility for my words and apologize directly to those who have been hurt and offended by those words.”

The Academy Award-winning director–who has battled with alcoholism, and is heading back into rehab–goes one step further, asking for the assistance of the Jewish community in his recovery process. “I am asking the Jewish community, whom I have personally offended, to help me on my journey through recovery,” said Gibson. “I know there will be many in that community who will want nothing to do with me, and that would be understandable. But I pray that that door is not forever closed.”

Gibson may be waiting a long while for that door to open, as many big-name Jewish Hollywood personalities have spoken out against the star, including screenwriter director Nora Ephron and agent Ari Emanuel, the real-life inspiration for HBO’s “Entourage” agent Ari Gold. “People in the entertainment community, whether Jew or gentile, need to demonstrate that they understand how much is at stake in this by professionally shunning Mel Gibson and refusing to work with him, even if it means a sacrifice to their bottom line,” Gold wrote on HuffingtonPost.com.

In fact, the ostracization of Mel is already underway: The Wall Street Journal reports today that ABC is pulling the plug on a Holocaust miniseries that the network has been developing with Gibson. Apparently the Mouse House doesn’t deal with rats. Meanwhile, ABC’s grande dame Barbara Walters remarked on “The View” Monday morning that she didn’t think she’d be watching any more Mel Gibson films; but I’m sure she’d love to have the first interview with him after his stint in rehab. 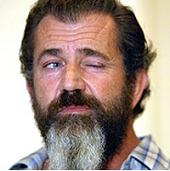 Well, There Goes the 'Passion' Sequel
archives most recent
More from Beliefnet and our partners
previous posts