5 Reasons We Stay in Broken Relationships

Many of us remain in broken relationships far longer than we should.

And a large number of us lack the self-protective boundaries which would get us out sooner. 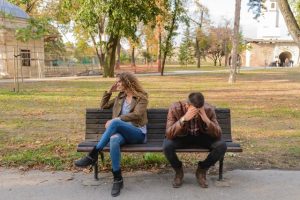 Instead, we concentrate on the actual ‘no longer working’ relationship more than we do on ourselves.

Partnerships which in many instances have long ago turned entrepreneurial. One or both people have begun living more for themselves than together or one person has stopped trying while the other never gave up. There are symptoms which emerge, increased arguing, yelling, withdrawal from one another, bitterness, complaining, resentment and unhappiness.

It seems for most other things in life there exists a timeline marked by numbers.

There are annual physicals, annual performance reviews, and oil changes.

The grass is too tall and needs to be cut

The carpets are dirty and need to be cleaned.

However, there are no relationship physicals or emotional performance reviews.

A large part of why we allow so much time to evaporate before we get out of a situation.

A situation which no longer benefits us or frankly the other individual in it.

5 Reasons We Stay in Broken Relationships

Sometimes there is really no good reason we haven’t moved on.

Perhaps we are avoiders and confronting the truth and potentially hurting someone we once loved feels hard.

Or maybe it’s because change is not only difficult it requires a certain degree of strength and effort to finally make it happen.

Or we love this person but really are no longer ‘in love’ with this person.

Or possibly we have just become accustomed to the status quo.

There are many reasons for emotional procrastination.

Sometimes we just aren’t in a hurry to end a relationship.

Some relationships may not be great but lack the emotional fireworks (yelling and arguments) that make us get out sooner.

Or we know it’s time for a change but haven’t been incented enough to leave because all other aspects of life are going well.

Or it’s complicated to leave in terms of housing and money and other economic factors.

Or we don’t really know what we want even though this relationship isn’t working anymore.

There are many reasons people become apathetic in a relationship but it is contradictory to love – we should feel something.

This is a huge reason many can’t move on from a love which has run its course.

It’s absolutely impossible to accept a relationship is over so we go into denial.

We tell ourselves someone isn’t who they are. That they are just in pain or acting out. That they will treat us better. They will value the relationship as much as we do. We see the best in the person we love even if they hurt us over and over again or behave badly in the same manner again and again.

We convince ourselves it will recover and one day be resuscitated.

Denial creeps in because the relationship truth is just too painful to accept.

This includes phrases, such as, “no one is really happy,” “all men behave like this,” “all women act this way,” and “the grass is never greener.”

While it’s true the grass is seldom greener, it’s important to recognize if these and phrases like them are being said to make an individual feel better about their situation.

If they are said in the spirit of commiseration it’s probably not the happiest of relationships.

Rationalizations are excuses to make us feel better for not being particularly happy.

There is no greater pain than the loss of those we love whether it’s true grief or the grief which accompanies a breakup.

Because of this, we limp along avoiding a sharp pain in favor of long-term aches.

The sad truth; however, is eventually if a relationship is really truly broken the pain is coming there’s no avoiding it.

We just hurt ourselves and the person we love more by not providing closure sooner.

When a relationship no longer works pain is inevitable.

These are five reasons we stay past the close.

It would be so much easier if there were those annual relationship physicals and emotional performance reviews.

Because one thing we know for sure is the heart is complicated.

And the more we ignore the more complex love becomes.