Why Disrespectful People Are So Toxic

Relationships are hard enough without the addition of a difficult personality.

This is true in all relationships, not just romantic ones.

The problem with a disrespectful individual is they are actually a complex ball of wax. A host of other less than favorable qualities tend to go hand in hand with a person who respects only their own way of living, beliefs, thoughts, and overall world view. 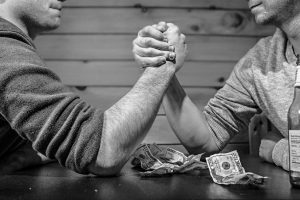 A Need To Be Right

A Lack Of Graduated Confidence

Can Lack Empathy in Arguments Or Differences Of Opinion Because Their Need To Be Right Overrules It.

Now compare this to:

No True Need To Be In Absolute Control of Everything

No Need To Be Right

Ability To See And Appreciate Others For Exactly Who They Are

For The Most Part Good Communicators

A disrespectful person tends to be somewhat insecure even if they project outward confidence.

A person with fully graduated confidence does not find it threatening to not be right, in control,

A person with fully graduated confidence does not find it threatening to be wrong or not be in constant control or encounter people who are widely different than they are.

Another way of explaining it would be in terms of ‘ego.’

An immature ego tends to be disrespectful. This individual has not ‘grown’ or ‘grown up’ enough. They are akin to a spoiled child attempting to show those around them and the world they know the best and correct way to live life.

A mature ego tends to be respectful. This individual has done the hard work of ‘growing’ or ‘growing up.’ They are unspoiled in their interactions with others. They accept and embrace the differences in others and understand it’s both the beauty and complexity needed to live life. It’s illogical to expect everyone to think and act alike. Not to mention, extremely impractical to the mass variety of talents and views needed to accomplish the world’s needs.

It’s best to keep your relationships on the respectful side. There will be less frustration, less conflict, and less heartache.

Oh, and one more thing.

Ironically, many a disrespectful person will actually view themselves as respectful.

An additional conundrum to being in a relationship with them – turning it into a never-ending ego arm wrestle.