Today I took my sweet little ‘Phyllis’ for her very first veterinary appointment.

That’s what we decided to name her. It suits her. And ‘Hazel’ and ‘Phyllis’ just fit together perfectly. A couple of little ole ladies.

If I didn’t already believe ‘Phyllis’ was meant to be ours now I am certain. It turns out coincidentally my vet just got his very own little yellow lab puppy.

Yup, you guessed it!

Today my ‘Phyllis’ was reunited with her sister. 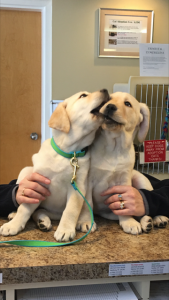 A small world. An even smaller world because this is the same animal hospital that years ago was affiliated with the kennel I worked at during my high school and college years. And back then two young veterinarians just out of school bought the practice and it is one of them who now has her sister.

An even smaller world because this is the same animal hospital that years ago was affiliated with the kennel I worked at during my high school and college years. Just before I left, two young veterinarians bought the practice and it is one of them who now has her sister.

The girls saw each other and it was a ginormous love fest!

Though my ‘Phyllis’ was somewhat of the beastly alpha sister. That is her on the left in her tasteful green and blue collar.

A few moments later…a young woman walks through the door with the cutest little chihuahua puppy. It’s their brother from another mother – ‘Peanut.’ The man who raised the labrador puppies also had a litter of chihuahua puppies his wife had bred.

The puppies were born days apart so the girls recognize ‘Peanut’ immediately. 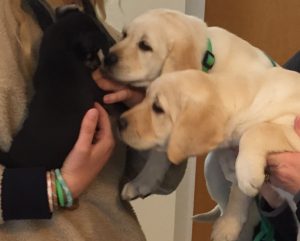 We are all gushing at the over the top cuteness before us. We snap a few family portraits to commemorate both their reunion and their eight week birthdays.

In walks another puppy. An adorable Springer Spaniel / Labrador mix rescue. No relation but the bond and lovefest continues.

We say our difficult goodbyes and as I walk outside I chat with the owner of the rescue puppy.

I tell her he looks as if he will be a big boy and she agrees. Something she took into consideration since she will be bringing him to work with her every day. Of course, I love this! So great she can bring her doggie to the office with her.

We chat a bit more. She’s an attorney. A former divorce attorney.

I confess I have gotten ‘Phyllis’ at a time in my life when much is up in the air in my own life because of divorce. 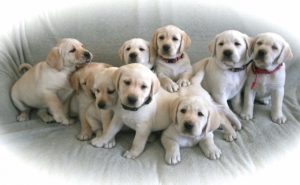 She asks me about a few of the particulars.

When we part ways, I make my way to my car.

An older gentleman walks up to me. I think he is coming to get a closer look at my cutie. The past few days my little girl has made us many new friends.

“Can I tell you something,” he says.

“I overheard the two of you talking and I want you to know not all men are like that.”

This incredibly kindhearted individual talks to me more like a father to a daughter than a man to a stranger.

He smiled and turned to walk away.

A lump crawled up inside my throat.

My uncle was really the closest thing I had to a father. I miss him terribly. In fact, my boys and I had even tried to come up with some suggestions for naming the puppy that would remind us of him. My uncle was supremely kind. He was also respectful and a huge advocate for his sister’s and his nieces and the women he knew.

This kindhearted stranger cared enough to inspire and extend compassion to an otherwise disillusioned younger woman.

And remind her there are truly good men out there like himself and the uncle who helped raise her. 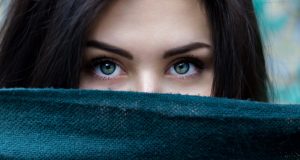