Why You Really Lose Yourself in Relationships and Divorce

I talk to people about divorce all the time. I joke that I am the ‘Divorce Whisperer.’ I know many secrets and I keep them all. I share the other stuff. The things that people give me permission to or the universal truths.

So many people that I meet tell me that they lost themselves in their marriage and divorce. It is generally followed by how they are attempting to rediscover themselves.

However, when individuals say they lost themselves, what does that really mean?

It means that at some point they stopped giving themselves permission to be who they truly are. How did that happen? It happens by taking on roles where one allows themselves to become overly-responsible for another and under-responsible for themselves.

I write about this in my memoir and not only because it is a universal truth in many broken relationships. I write about it because my business marketing background gives me a unique perspective on this. Over time, we have heard again and again, make time for yourself and indulge and take care of yourself. We never do this. At least not for the long-term. Why? We don’t really believe it. We believe that it’s selfish, spoiled and frankly, not responsible because there are so many people that need us and so many things to do.

So we go back to being overly responsible for another, whether it’s a spouse or our children.

Here’s the thing. We aren’t helping our significant other by being overly-responsible for their schedule and their needs and ignoring our own because eventually we become used up. More importantly, a truly, mature significant other would never expect this of us. They would expect us to be their equal partner and not their parent.

It’s sometimes harder to let go of being overly-repsonsible for our children because we feel that they always need us. However, it’s really a great part of their adolescence and life lesson to be strong and independent and we need to let go of them just enough that they grow up and become self-responsible so that they go out and marry their own equal and are not looking for another to be their overly-responsible parent that lets them get away without being responsible for themselves.

From a business perspective, everything falls apart without each person being themselves and contributing their unique talent.

When someone loses themselves in a relationship, it’s not a positive thing for them or the person they think they are continually rescuing. In fact, before a person loses themselves, they have spent many years believing they were doing a good thing for those they love.

It’s never a good thing to give away so much of ourselves that we lose our ‘unique brand’ in the game of life. In fact, we are all here to keep playing in such a way that we contribute our best self and purpose.

It’s time we begin to focus on ‘giving ourselves permission to be ourselves in the right way.’

It’s anything, but indulgent to invest in ourselves. It’s critical because we lose ourselves not from selfishness, but from extreme selflessness. We are failing to teach the ones we love how to play their own position in life.

No one should ever give away so much of themselves that they lose themselves.

No relationship, family, business or team does well when each individual doesn’t self-protect their individual talent and value and nourish it.

Go find yourself and when you do, don’t ever relinquish your position again. 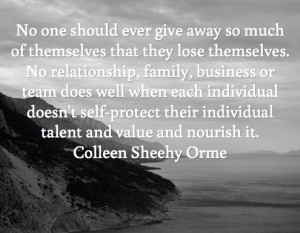