Be a Divorce Lighthouse for Someone

I punch at the computer keys. Tears find their way down my cheeks. I dab at them while my chocolate Labrador Hazel snuggles closer to my feet.

I find myself chuckling. In between the tears, that is. After all, I am editing my own work. Am I that good a writer that I move my own self to liquid emotion? Or is this evil word they call ‘divorce’ really the culprit? I’m pretty sure it’s the later though it would be nice to believe my writing skills are owed the honor.

There is a quote by Jon Acuff – “When you refuse to hide your scars they become a lighthouse for someone else.”

I am not sure that I originally wanted to be a lighthouse. I just know that in my own pain I had searched for one to no avail.

You need a lighthouse in divorce to guide you through the journey and to your new people. The other ones out there just like you since you are in between teams. You aren’t quite out of the married world and you’re certainly not quite ready for the single world.

It’s like football. If you’re a die hard fan there can only be one team which has your loyalty.

I once brought my children to an Eagle’s game in Philly. My children have grown up in metropolitan, D.C., but don’t tell them that. They think (when it comes to sports) that they grew up in Philadelphia with their father.

We attended this game with friends of ours who wore their Redskins jerseys. Anyone who knows anything about Philly knows that even professional athletes don’t necessarily want to play there. The fans are brutal. In Philadelphia I think they call it ‘loyal.’

Sure enough, it doesn’t take long before shouts of profanity travel through the air.

The problem was he wasn’t wearing their jersey. If they couldn’t identify him in green and black then they had no use for him. It’s a culture. You are either one of them or you’re not.

Divorce is sort of like that. Only to be fair, it’s far scarier to be in Philly sans your green and black.

So essentially I am in suburbia minus my jersey. No longer identified with a team.

The marrieds in my life are wonderful. It’s just that I am no longer one of them. The joint dinners, vacations…I don’t really qualify any longer.

I don’t blame them. I once feared being me too. I loved being a part of a couple, but that was before life tossed my heart around. It was before I watched love walk out of the room forgetting to take me with it.

I am back to pounding on my computer keys. I feel guilty sharing these thoughts. Sometimes even writers who overexpose their hearts want to cover them up. There are; however, others out there like me. The uncomfortable ones looking for their people…looking for their lighthouse.

Hazel gets up, circles a few times, and eventually falls back into a snooze.

I admit it. I feel naked without my jersey. I just remind myself it could be worse. I could be surrounded by the ‘loyal’ fans.

I could be divorcing in Philly. 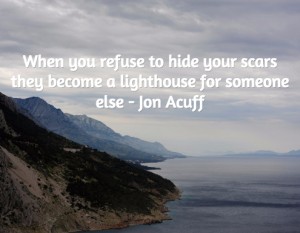