I was scrolling down my twitter feed – something I rarely do – when a headline caught my eye: Orthodox Rabbi Marries Gay Couple in Washington DC. I couldn’t imagine that this article could really be about an Orthodox Rabbi marrying two Jewish men under a chuppah, but I was curious about what actually happened to merit the misleading headline. When I checked out the artlcle I found out that that was, in fact, precisely what happened – Rabbi Steve Greenberg married two men (in kittels) under a chuppah at the Historic Sixth and I Synagogue.

Some of you might find the idea of gay marriage and/or a Jewish gay wedding uncomfortable, unfamiliar, or problematic. But I live in Northampton, the self-proclaimed “lesbian capital of the world.” I teach in a Jewish day school with a significant population of two mom families. Jewish gay weddings are nothing new to me. But an Orthodox gay wedding? Well, that’s something we don’t see much of, even in Northampton. 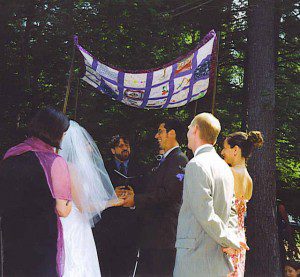 Looking at the article more closely, I was struck by how similar Yoni Block and Ron Kaplan’s wedding was to my own. Nearly ten years ago, I married a non-Jewish man. As a once very observant Jew with a yeshiva background, I wanted a wedding that felt as joyful and as full of Jewish tradition as the many Orthodox weddings at which I had the privilege to dance, while respecting the boundaries of halacha. (You can read more about how we did it here.) Like Block and Kaplan, my then-fiance and I worked with our rabbi to create “a ceremonial text that reflected the uniqueness of the event while incorporating the traditional elements of a Jewish wedding.” Like Block and Kaplan, we changed the language of Harei at m’kudeshet li (behold you are consecrated to me). In their case, the changed the gender of the pronouns. In our case, we omitted k’dat Moshe V’Yisrael (according to the law of Moses and Israel.)  Like Block and Kaplan, we replaced the language of the traditional ketubah with a contract that spelled out the terms of our partnership.

What I hope we have in common (because they nailed it) is the overwhelming sense of yiddishkeit, honesty, and integrity evident throughout the ceremony. Their video, like ours, shows the inception of a bayit neeman b’yisrael, a faithful home among the Jewish people. It just might not look quite like your bayit, or even my bayit. Except, you know, for the love part.

Another thing both weddings have in common? Not a dry eye in the house. Just watch. But grab a hankie before you do. 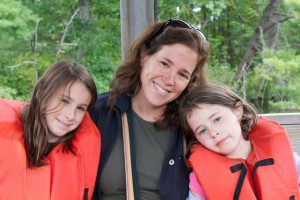 Is there a right way to praise your children?
archives most recent
More from Beliefnet and our partners
previous posts