Joseph and the Sabbath Fish, or I love Eric Kimmel part two

I few months ago, around the time of Purim, I had the great honor of interviewing the children’s book author Eric Kimmel. Since then, he’s been kind enough to friend me on facebook and even write a nice blurb about The Shabbat Princess. So, I was thrilled when Kar-Ben offered me a review copy of his latest Jewish book, Joseph and the Sabbath Fish.

After reading this tale of a very hospitable Jew, a ruby, and a fish, I had a nagging feeling that I had heard parts of the story before, though I couldn’t recall where.  I asked Eric (see how I get to call him “Eric” now?) about this, and he told me that in fact it’s a very old story that goes back to the Talmud. 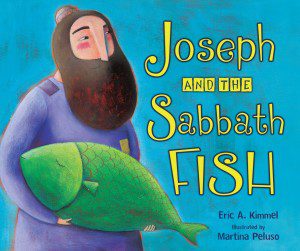 Intrigued, I looked up the original version. It turns out, the source of the Joseph and the Sabbath Fish is eight short lines in the Babylonian Talmud, that go something like this (translation from Halakhah.com)

Joseph-who-honours-the-Sabbaths had in his victory a certain gentile who owned much property. Soothsayers told him, ‘Joseph-who-honours-the-Sabbaths will consume all your property.— [So] he went, sold all his property, and bought a precious stone with the proceeds, which he set in his turban. As he was crossing a bridge the wind blew it off and cast it into the water, [and] a fish swallowed it. [Subsequently] it [the fish] was hauled up and brought [to market] on the Sabbath eve towards sunset. ‘Who will buy now?’ cried they. ‘Go and take them to Joseph-who-honours-the-Sabbaths,’ they were told, ‘as he is accustomed to buy.’ So they took it to him. He bought it, opened it, found the jewel therein, and sold it for thirteen roomfuls of gold denarii.  A certain old man met him [and] said, ‘He who lends to the Sabbath,  the Sabbath repays him.’

It’s not a bad story, even in its simplest form. But Eric takes this simple thread of a tale, and weaves a tapestry  – colorful, richly textured and alluring. The pictures are gorgeous, in chalky colors that evoke Tuscany and the Greek Islands. (Or maybe I just need a vacation.) It’s a wonderful addition to any collection of shabbat books, which in my opinion can never be too large. (Which means that you can buy his book and mine.)

Recently, I remembered where I originally heard the story. It was on a children’s cd of stories called Far Away and Close to Home, by Noa Baum.I remember taking an instant dislike for the track, called Yankel and the Sabbath Fish, because the protagonist never tries to find the original owner of the jewel found inside the fish, which struck me as a terrible (and un-Jewish) value to impart to kids. In Eric’s version {spoiler alert}, Joseph not only finds the owner, but offers to return the value of the jewel to its rightful owner. Which is as it should be. Wouldn’t you know that Eric would get it right?

Shabbat Shalom to all!

Scenes from an interfaith wedding, nine happy years later
archives most recent
More from Beliefnet and our partners
previous posts