America the beautiful – talking with my kids about our country, warts and all.

I’m not a flag-waving, my-country-love-it-or-leave-it-bumper-sticker-toting, red-white-and-blue wearing kind of American. But I absolutely love my country. Yesterday, on Independence Day, I thought it was important to take a few minutes to tell the girls a little bit about why our country is fabulous. It turned into a really interesting conversation (to me, anyhow.)

ME: When my grandfather and my great-grandparents were growing up in Europe, it was very hard for them to be Jewish. There were places they weren’t allowed to live, and jobs they weren’t allowed to have. Sometimes people would hurt them just because they were Jewish and the government wouldn’t do anything to help them. In this country, you can’t make bad laws about people or hurt them because of their religion. That’s one of the reasons they moved here.

ZOE: That’s sounds like what we learned about black people in this country.

ME: You’re right. That was a huge mistake that our country made,  and it took a while to fix. But now you also can’t make bad rules about people or hurt people because of the color of their skin.

ELLA: Are there still any bad laws in our country?

ZOE and ELLA (who know quite a few two-mom families): REALLY?

ME: Really, But the great thing about our country is if there is a law we think is bad, we can try to change it, and if enough people agree with us, the law will get changed. That’s how the laws about people with different color skin got changed.

ME: Well, I’d say the biggest problem isn’t exactly bad laws, but it’s that a lot of people don’t have enough money for a place to live and food to eat.

ZOE: But the Survival Center helps them!

ME: It does, but it can’t do enough. That’s something else we can work on to change. 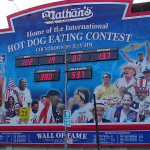 What's Jewish about competitive eating? (an encore presentation)
archives most recent
More from Beliefnet and our partners
previous posts