Interfaith, same sex, and every other kind of marriage is holy to someone 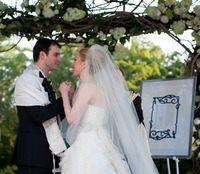 There’s been a lot of talk in the news this week about weddings and marriage. It seems that almost everyone has an opinion about who should be allowed to marry whom, how and when certain groups of people should mark their lifetime commitments, who should and shouldn’t officiate, and which unions are genuine marriages.

You know what I think? Marriage is one of the most important and highly personal decisions two people can make. If you don’t like the kind of union someone is creating, well, then don’t have one. And to people who claim that allowing two men or two women to legally wed, or a having rabbi participate in an interfaith ceremony before Shabbat has ended, is somehow a threat to the “right” kind marriage…….seriously? I mean, seriously?

Personally, I’d love to see the government get out of the marriage business entirely. Let people register their domestic partnerships much in the same way they register to vote, and leave the rituals and celebrations, should they choose to have them, up to them.

That’s what I think, anyhow. Mazel Tov, Chelsea, Mark and every gay man and women in California who has sought the right to marry. Of all the problems we face in this world, is too many people promising to love each other forever really something to complain about?

And while this has nothing whatsoever to do with gay marriage, I was thrilled to see more former chumash teacher at the forefront of this statement of support for gay and lesbian Jews.

Back from vacation, again.
archives most recent
More from Beliefnet and our partners
previous posts