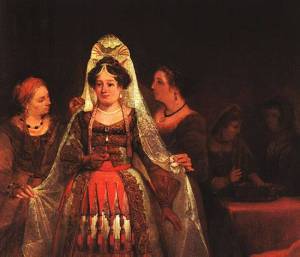 not quite how i imagine esther

Recently Ella has begun creating her own megillah, a telling of the book of Esther, which she is hanging on the walls of her and her sister’s bedroom. Consequently, she’s been trying to clarify a lot of details of the story and asking me a lot of questions. And some of these questions are hard to answer, because really, some of the story is just not six-year-old material.

Yesterday, she asked “How did Achashverosh decide which queen to choose?”
“Well,” I said, “he gathered women from around the kingdom. And then he chose the one he liked best.”
“But what was the test,” she persisted.
How do I answer this? I don’t love the message of a beauty contest as a method for choosing a wife. I’m just a wee bit less crazy about the message of a harem as a method for choosing a wife. On the other hand, I want to support her questions and encourage her interest in the story.
Ella’s knowledge of the story of Purim comes from children’s books and my own retelling of the story. I realized that if she is going to start creating her own midrash, filling in the gaps in the story with her own imagined details, I don’t want her basis to be Mordicai Gerstein‘s or Diane Wolkstein‘s version of the megillah, as wonderful as they might be. (And I definitely don’t want to it be the picture book version that comes in her school’s Hebrew curriculum, which is like the worst of every straight to DVD Disney movie with lots of pictures of a cartoon Haman hanging dead on a noose for good measure.) I want it to be the megillah’s version of the megillah.
So, when she asked me about Ahashverosh’s test, I said “Let’s go see what the megillah says.”
I opened a really old copy of the Tanach (it has a JNF stamp in it for the “George Washington Palestine Forest Fund”) for dramatic effect, and read to her.
“And the maiden was pleasing in his eyes, and she obtained favor before him; and he made haste to give her her anointings with her presents………And Esther was taken unto king Achashverosh, unto his royal house…and the king loved Esther above all women, and she obtained grace and favor before him more than all the virgins. (OK, I didn’t actually use the word virgins. Enough questions, already.)
“So what do you think?” I asked her. “How did he choose?”
“Well, it said she was ‘pleasing in his eyes.’ So I think he chose her because she was beautiful. That was the test. He looked at her and saw how beautiful she was.”
I couldn’t resist pointing her that this is not a terribly good way to choose a life partner.
“Mama,” she said. “He really didn’t think too much. Remember? He spent most of his time eating and drinking.” (In other words, duh, mama.)
I sought out a yeshiva education relatively late in life, spending two years engaged in full time study at Drisha Institute in my mid 20’s. I’m delighted to see that Ella is definitely ready at age six to ask, and try to answer, thoughtful, meaningful questions. It’s my job to start giving her (and me) more opportunities to engage in close text study.
read next post 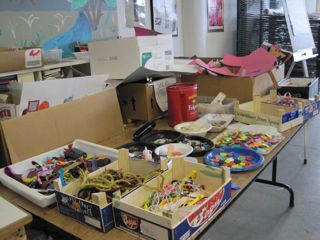 What's even *fancier* than Valentine's Day?
archives most recent
More from Beliefnet and our partners
previous posts