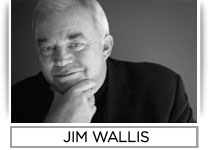 Christian music made headlines of a sort this morning when Glenn Beck talked about Jim Wallis, founder and editor of Sojourners magazine and of the Washington, D.C.-based Christian community of the same name and the Wisconsin Christian music festival, Lifest.
Seems that the local Wisconsin Christian radio station, Q90 FM, has pulled its sponsorship of the Lifest Christian music festival over the fact that Jim Wallis is on the speaker’s line up, citing disagreements with him over a humanistic message of social justice.
The station has a statement on its website that say, in part:

“Q90 FM and HopeNet 360 take seriously our responsibility to our listeners, to provide the true Word of God and the hope of Jesus through our music and programs. While we value the work of Life Promotions, proudly partnering with them for many years in our shared mission to reach youth for Christ, we became concerned with the beliefs and teachings of one of the main speakers at Lifest 2010, Jim Wallis. After researching extensively the words and published positions of Jim Wallis and his organization, Sojourners Magazine, and seeking fervently the guidance of the Holy Spirit in prayer, we believe the social justice message and agenda they promote is a seed of secular humanism, seeking an unholy alliance between the Church and Government.”

“Humanism says, “It’s up to us to save us, our planet, the poor”, instead of “It’s up to God and His power through us”. Humanism says “man is inherently good–it’s only the social constructs, such as too-limited a government or our free-enterprise, capitalist economy that oppress man, making him do evil”, instead of “man is inherently sinful, responsible for his own choice to sin, and in need of a Savior.” (Romans 1:25). The humanistic social justice message in many of Sojourners’ issue FAQs points to government as the solution, instead of our Lord Jesus Christ.”

And even more importantly, the station ends their statement with this (emphasis theirs):

“We are not calling for a boycott of Lifest. We do not view Jim Wallis as an enemy nor do we think of Life Promotions as the enemy or a bad organization. We believe Life Promotions is doing great things for the Kingdom of God . We just have a fundamental disagreement on the wisdom of bringing Mr. Wallis to Lifest. We realize many great things occur at Lifest through the music and many of the speakers. In these increasingly challenging times with growing threats to God’s people, we ask every Christian to read the Bible with great discernment, look at the views of Sojourners and the opposing views, and prayerfully seek God’s wisdom and guidance. If you do attend Lifest this year, our prayer is that you will be blessed and that God will bless Lifest and our friends at Life Promotions.”

I don’t know Jim Wallis, much about Sojourners, or what the festival itself has to say about the station’s decision to pull its sponsorship.
But I can say that I got some … err … lively feedback … when I commented about one megachurch’s “We can save the poor” campaign, for the same reasons the station cites: We don’t save the poor. GOD saves the poor through us. It may seem like a minor difference, but it’s a slipperly slope that looks to other people and not God for the answers. We feel empowered because of what “we can do” when in fact we can do nothing; it’s all God and we’re blessed to be part of the process.

Then again, God calls each of us to different ministries, and just because we don’t understand someone else’s call doesn’t mean we have to dismiss it out of hand. I don’t know what Sojourners’ preaches, and until I do I can’t even begin to tell you whether I agree with it or not.
In short: it’s important to be Berean in situations like this. Search the scriptures, pray, discuss in a calm and open minded manner.
It’s easy to dismiss Wallis out of hand if you’re a conservative Christian. On his blog, there’s a note that he’s on a tour of the Gulf Coast with an interfaith group, sponsored by the Sierra Club. He’s aligned politically with the Democratic party. Those are code words that scream “liberal” to those Christians who live their faith by labels.To that I say, So what? Not all Christians are Republicans, and many are (and all should be) concerned about environmental issues and being good stewards of the environment.
At the same time, I understand the concerns about mixing faith and politics, and the current mindset that diefies nature; again, it’s a very gray area that requires prayer and researching of the Scriptures for guidance.
Like Q90 FM, I don’t think we need to automatically move into boycott mode just because you disagree with something. I think it was a very professional and very Christian way to handle the situation by pulling their own sponsorship but telling people to go ahead and go to the festival.
And that goes for Wallis’ boycott of Glenn Beck. Does Beck go into conspiracy mode? Sometimes. But he’s also a stickler for research and prayer, and as such doesn’t raise issues like this with his listeners haphazardly. I’m a regular listener of Beck’s radio show, and trust me: He has not called for a complete boycott of all things “social justice.” What he rails against is the social justice that’s tied to politics, the “I’ll let the government fix my problems” mentality, which if you read the Scriptures is something we’re warned to avoid.
So let me ask you a couple of questions:
1) When you spend your money at Christian events or on “Christian” products like CD, books or magazines, do you investigate the actual beliefs or statements of faith the artists, authors or event planners adhere to? Do you make decisions about Christian entertainment based on news stories or the political affiliation of the artists?
2) When you hear a story like this, what’s your first reaction: boycott, either the festival or Beck? Pick up the Bible and see what the Scriptures say? Ask your friends for their thoughts?
3) And specifically, are you going to Lifest? Has this news story changed your mind either way?
I’d love to hear what you think!
For more information about Lifest, visit their website.
To read the entire statement from Q90 FM, visit the radio station website.
For more information about Jim Wallis, visit the Soujourner’s website.
You can find a Christian music festival in your area by visiting the Christian Music Festival Association website.
read next post
Bucky Covington's A Father's Love and Christian country act High Valley
archives most recent
More from Beliefnet and our partners
previous posts