While the USA and Canada hockey teams were battling it out on the ice this week at the Vancouver Olympics, Christian artist Jennifer Shaw was having her own USA vs Canada moment at the Canadian border.
The Ohio native was on her way to Ontario, Canada to record an interview for the television show “100 Huntely Street”, Canada’s longest running daily TV talk show.
At the border, the guard asked Shaw why she was entering Canada, and she explained that she was going to sing on a TV show.
The guard asked Shaw if she knew that the USA and Canadian hockey teams were playing that night, and when she said yes, he told her the only way he’d let her into the country was if she sang “O Canada”, the Canadian national anthem.

Shaw begrudgingly complied, filling in the words she didn’t know with “la la la”. That satisfied the guard and he let Shaw through.
Even though it was all in fun, Shaw’s publicist later joked, “The U.S. team later got Jennifer’s revenge…”
Jennifer Shaw graduated with a Master’s degree in Vocal Performance from the prestigious Manhattan School of Music, and started her career in opera. She performed in over forty shows in the theater, from Shakespeare to Puccini operas, and later became a Professor of Music for Cedarville University and performed with the Columbus Symphony.
Whe her father was diagnosed with Lou Gehrig’s disease, Shaw decided to record a CD of self-penned, contemporary Christian songs and give it to her dad as a Christmas gift.
“Dad always supported my opera career, but it wasn’t really his cup of tea,” says Shaw in a press release. Though the CD was meant for her father’s personal enjoyment and encouragement, her first foray into the Christian genre was eventually featured on over 300 radio stations around the world, including South Africa and Australia.

Shaw’s song “Your Great Name,” from her album Love Broke Through, is in the Top 3 on the worship charts.
You can learn more about Jennifer Shaw on her website.
Got a gospel or Christian music news tip? Send me an email!
Click here to subscribe to Gospel Soundcheck by email and have the Gospel Soundcheck headlines delivered daily to your email inbox. And don’t forget to follow me on Twitter! 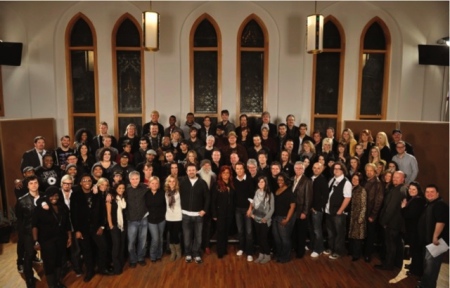