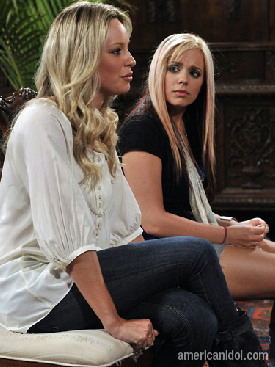 The final night of Hollywood week found the contestants doing their face-to-face meetings with the judges (unfortunately, minus the elevator cam), with an added twist: some contestants had to sing again in a “sing off” between contestants.

But before I get to that, I have to say one thing:
Jamar Rogers went home! I’m in total shock. Shocked! The guy has a great voice, a wonderful attitude and a great Idol look. It would have been amazing to watch Danny and Jamar go through the competition together.
(UPDATE 2/1/09 – Want to know what Jamar’s up to now? Visit this post: American Idol’s Jamar Rogers and Frankie Jordan – BIG BIG NEWS)
And Tatiana Del Toro stays? Even if she has a good voice, who in the industry is ever going to be willing to work with such an unstable artist? She babbled endlessly about her stupid star bracelet from Paula’s jewelry line, whining because she wanted the ring and they were out, until Paula stood up and gave her her own ring. I’m beginning to think there’s something seriously wrong with Tatiana, like a personality disorder. Instead of sending her through to the top 36, they should have sent her straight away for a psych evaluation.

So there’s the deal: instead of a heartwarming story of two best buddies in a possible final two, we get a mentally imbalanced spectacle.

But, honestly? I should have seen it coming. When I talked to someone at Faithbuilders this week, where both Danny and Jamar are involved, they said he “is actually recording some stuff in LA as we speak.” Oops. If I’d been paying attention, I would have realized that if you’re getting ready to compete on the live show, you probably aren’t out recording now.
If you saw my predictions for some of the top 36, you’ll see I did a pretty good job, eh? I wasn’t sure if Ryan Johnson and Melinda Camille were still in the competition, but I added them just in case. They didn’t make the final 36.
I had Ashley Hollister on there and she went home, but to be honest, if she’d walked into my living room and introduced herself I still wouldn’t have known who she was. I just had her on one of my lists and put her on the prediction list without thinking about it. I also had Jorge Nunez on the list, whom I love, and somehow forgot to add him when I typed the post. All of which goes to show you shouldn’t attempt complicated tasks while taking muscle relaxers. But I digress.
The sing-offs gave the judges a chance to hear two contestants they were on the fence about sing one after the other. And, surprisingly, they had Frankie Jordan and Jesse Langseth sing. I had both on my list, but when I heard them side by side, there’s no question that Jesse had the better voice. Well, unless you were Frankie, who asked the judges, “So you think there were 8 girls better than me?” to which Simon replied, “You’ll see.” I guess with Tatiana there the judges could only handle one ego this season.
Other sing-offs:
Jackie Midciff and Nathaniel Marshall – Nathaniel might be a bit of a goofball, but he was the better singer.
Jen Korbee and Kristen McNamara (pictured) – who even knows who Jen Korbee is, other than Simon? We barely saw her. After the sing off, Simon asks the other judges if they should take the very attractive blond or the other one. He was talking about Jen Korbee. In the end, there was no question that Kristen is the better singer, but Paula told her she has an identity crisis. Translation: the girl can’t dress herself. She looks like she fell into the Goodwill bin and just wore whatever stuck to her. They put Kristen through, despite Simon’s annoyance and protests. Kristen should be thankful for the stylists she’ll have from now on.
The final sing-off was between Michael Sarver and Matt Breiztke, who working guys with big voices. In the end, the judges put them both through.
Adam Lambert made it through. I’m glad for that, because he has a great voice. He just needs to pick really good songs. No musical theater!
Of course, familiar names including Lil Rounds, Danny Gokey, Anoop Desai, Scott MacIntyre, Michael Sarver, and Jasmine Murray made it through.
Joy of all joys, Nick Mitchell made it through! Which, considering Jamar didn’t is a disappointment to some of you, I’m sure. But there were worse singers that could have been sent home so Jamar could stay (or even singers we don’t know, like Ricky Braddy. Who is he? Or Kai Kalama? Or even Tatiana. It doesn’t have to be a guy. Again, I digress.). Nick told the cameras he’d do whatever it takes to make it to the top 36, including washing Simon’s cars, being Paula’s butler, or wearing a bikini like Bikini Girl. In the end, all the judges want is for him to keep being Norman Gentle.
In the end, the vast majority of the top 36 are names you’ve come to know and love. Next week, the first set of 12 compete and America will vote for the top male, the top female and the next-top vote.
Your top 36:
Adam Lambert
Alex Wagner
Alexis Grace
Allison Iraheta
Anne Marie Boscovitch
Anoop Desai
Arianna Afsa
Brent Keith
Casey Carlson
Danny Gokey
Jackie Tohn
Jasmine Murray
Jeanine Vailes
Jesse Langseth
Joanna Pacitti
Jorje Nunez
Ju’Not Joyner
Kai Kalama
Kendall Beard
Kris Allen
Kristen McNamara
Lil Rounds
Matt Breitzke
Matt Giraud
Megan Corkrey
Michael Sarver
Mishavonna Henson
Nathaniel Marshall
Nick Mitchell
Ricky Braddy
Scott MacIntyre
Stephen Fowler
Stevie Wright
Tatiana del Toro
Taylor Viafanua
Von Smith
RELATED POSTS
American Idol’s Jamar Rogers and Frankie Jordan – BIG BIG NEWS</a
Breaking American Idol News: Joanna Pacitti Ineligible; Replaced By Felicia Barton
Idol Shocker: Jamar Rogers Sent Home, Tatiana Del Toro Stays
American Idol: My Predictions For Some Of The Final 36
American Idol Season 8 Contestants With Ties to Christian Music
American Idol Contestant Kristen McNamara & L.A.U.G.H.
American Idol Contestant Ryan Johnson Performs Tonight with Christian Band Instereo
Is Jesus at American Idol’s Hollywood Week?
American Idol Judge Kara DioGuardi Gives Contestant Some Solid Advice
More on American Idol contestant Danny Gokey and wife Sophia
What’s up with American Idol’s new judge Kara DioGuardi and why is the show milking contestants’ tragedies?
More American Idol Posts
And if you want more American Idol show recap, visit my Idol blog at NewChristianVoices.com.
Get the Gospel Soundcheck headlines delivered daily to your email inbox. Just sign up for the RSS feed by going to the “Subscribe” box on the right hand side of this blog and entering your email address.

What Is Christian Music and Why Do You Care?
archives most recent
More from Beliefnet and our partners
previous posts