Angela Martin (also known as A’wun) – she lists on her MySpace page that her favorite book is the Bible and her heroes are God and Jesus. Sure, that’s not really proof of anything, but any artist willing to actually admit that publicatly is an artist I’d put money on as a Christian.
Felica Barton – lists as one of her influences Israel Houghton.
Danny Gokey – we know Danny was a worship leader at Faithbuilders International and the founder of Sophia’s Heart, a ministry dedicated to helping children.
Jamar Rogers – the folks at Faithbuilders tell me, “Jamar is most definitely a huge part of our ministry! He has been on the music team for some time now … As he is shown on American Idol, he is an awesome individual with a great heart.”
Jackie Midciff – His dad is pastor at High Praises Church in Maryville TN.
India Morrison – She says she spends her spare time “in the United States Navy reserves and Attending every church function possible” and describes herself this way: “I am a divine original, fashioned by God to be Radiantly Beautiful.”

Matt Giraud – plays drums at his church and lists as one of his influences Michael W. Smith.
Kris Allen – he leads worship at New Life Church in Conway, AR and on campus at University of Central Arkansas with Chi Alpha Campus Ministries.
Tatiano Del Toro – on her MySpace page, she lists in its entirety the 31st chapter of Proverbs, which I doubt any woman would do (or even know about) unless she was a Christian.
Kristen McNamara – founded a ministry that she founded called L.A.U.G.H.: Love All Unconditionally Giving Hope.
Jesse Langseth – her brother is Grammy-winning blues rocker Johnny Lang, who won a Grammy in 2007 for his gospel album Turn Around
Ryan Johnson – plays with the Christian band Instereo
And then I gave up. To be honest, I can’t tell who made it through and will be here for tonight’s show so I didn’t want to spend time doing more research on people that won’t be here tomorrow. Let’s get through the rest of Hollywood week, and see what our contestant list looks like.
And if you know any season 8 American Idol contestants, give me a shout!
RELATED POSTS
Breaking American Idol News: Joanna Pacitti Ineligible; Replaced By Felicia Barton
Idol Shocker: Jamar Rogers Sent Home, Tatiana Del Toro Stays
American Idol: My Predictions For Some Of The Final 36
American Idol Season 8 Contestants With Ties to Christian Music
American Idol Contestant Kristen McNamara & L.A.U.G.H.
American Idol Contestant Ryan Johnson Performs Tonight with Christian Band Instereo
Is Jesus at American Idol’s Hollywood Week?
American Idol Judge Kara DioGuardi Gives Contestant Some Solid Advice
More on American Idol contestant Danny Gokey and wife Sophia
What’s up with American Idol’s new judge Kara DioGuardi and why is the show milking contestants’ tragedies?
More American Idol Posts
And if you want more American Idol show recap, visit my Idol blog at NewChristianVoices.com.
Get the Gospel Soundcheck headlines delivered daily to your email inbox. Just sign up for the RSS feed by going to the “Subscribe” box on the right hand side of this blog and entering your email address. 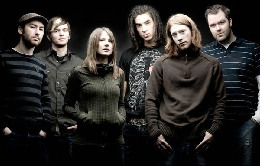