A Day at Kingdom Bound with Hawk Nelson

One of the things that I’ve always found fascinating is how musicians physically handle the daily demands of performing. Fans only see what happens on stage, but I imagine most don’t have a clue about what goes on behind the scenes.
I had this brilliant idea to spend the day with Hawk Nelson at Kingdom Bound and then give you a story on what it was like behind the scenes – follow the band to their various radio interviews, the sound checks, setting up and tearing down, and the time spent with fans.
I’ve met Daniel and Jason several times and we always have a lot of fun during interviews (which can cover everything from how to mow the lawn to sharing pictures of pets). I knew that it would be a fun day and a fun story.
A few days before the festival their publicist let me know that because the guys would be spending the day with family they wouldn’t be doing much media, but could give me an hour in the afternoon to catch up.
Not a problem, of course, until you remember that nothing ever goes as planned.

Jason had flown home to Ontario, Canada the day before. The rest of the guys were taking the tour bus that day from Nashville to Darien Lake Theme Park, where Kingdom Bound takes place. It’s just an hour or so drive from the Canadian the border, about a half hour east of Buffalo.
The guys were supposed to leave Nashville at midnight on Tuesday, and should have arrived at the festival very early the next afternoon (it’s maybe a 12 hour drive). But Tuesday night, when they got to their designated meeting place at the Walmart parking lot in Nashville, the battery on the bus was dead.
After attempting to fix the problem (with four marine batteries purchased at Walmart; no auto batteries were available), they eventually had to wait for another bus to come and give them a jump start. That got them on the road much later and not scheduled to arrive until evening.
On the flip side, Jason was spending the whole day in the park with his entire family – parents, siblings, and their families.
After killing several hours in the park waiting for the interview time, when I finally got word that the bus was going to be really late, the band’s publicist suggested that since Jason was in the park he get together with me to give me an update on the band.

Since the whole “spend the whole day with the band” idea was a bust, I felt guilty taking him from his family. He said he didn’t care, that he would hang out with us for a while, but I wasn’t going to take him from his parents and family just to chat about … well, nothing important. We did walk around for a bit, stopped every few minutes by fans that recognized him and wanted their picture taken with him.
“Did this happen to you a lot today?” I asked. “All the time,” he replied, as he posed for another picture. 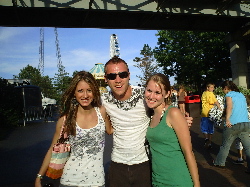 We ended up running into his parents and sister Melody, so I told Jason we’d take a pic with him for the blog and then I’d catch up with the guys at the stage later. There was no need wasting his time with us. (picture L to R: my daughter Cassie, Jason, Jason’s sister Melody)
Back to the bus. The guys finally arrived around 6:30 for their 8:30 show. In those two hours they had to unload, set up, set up merch and get ready for their set. They played for about 45 minutes and then had to tear down their equipment and deal with a long line – and when I say long line, I mean looooooong line – of fans waiting for autographs. I’m sure I was back to Rochester before they were finished signing and taking pictures.
And when it was over? Everyone but Jason (who went home for another night with family) got back on the bus to return to Nashville. Seriously. They drove about 12 hours, played a show, and then turned around and drove 12 hours home.
And they were so worried about the bus not starting again that they left it running the whole time they were there. I can’t imagine how much diesel fuel they burned at $5 a gallon.
That’s a lot of expense and driving for one show and a lot of chatting with fans (and media people). But they all were gracious and friendly with every single person who stopped them either in the park or backstage.
I don’t know how they do it. I’d spent most of the day just hanging around the park waiting for the interview time, and I was hot and tired and cranky. If I also had to be nice to every stranger who interrupted my time with my family to take my picture or ride on a bus for 12 hours, then set up heavy equipment, perform at high energy for 45 minutes straight, and then be nice to people again for another hour or so, I might have hurt someone.
Anyway, I hope that gives you a little behind the scenes peek at one day for a musician. There’s more to it than what you see on stage. I think that God really gifts people for certain ministries, and artists are no different.
To learn more about Hawk Nelson and their latest album, Hawk Nelson Is My Friend, visit their website.
RELATED POSTS

Flyleaf - oops, I mean Fireflight - at Kingdom Bound
archives most recent
More from Beliefnet and our partners
previous posts