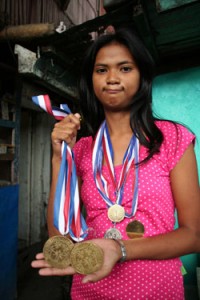 Every so often, you come across someone who truly inspires you. Recently, for me, that person is a teenager from the Philippines.

Emilda Soriano, now 18 years old, was left behind by her peers in kindergarten.  As a toddler, a high fever left Emilda with severe brain damage.  She was unconscious for six days and when she woke up she was never the same.  Today she is still unable to correctly identify letters, colors or numbers. Despite her mental limitations and their financial limitations, Emilda’s parents were committed to giving their daughter every opportunity to flourish. Pooling their meager wages as a tombstone maker and launderer (when they could find work), they managed to send Emilda to kindergarten—for five consecutive years.

At age six, Emilda began to participate in a program with Compassion International. Compassion staff quickly noticed Emilda loved running around the cemetery next to her shanty. And, though she only has the mentalcapacity of a three year old, once she learned not to crisscross from lane to lane, she was very fast.

Today, while Emilda still can’t tie her shoes, she has learned how to use them to run circles around her limitations. Emilda has qualified to compete in the 2011 Special Olympics World Summer Games in Athens, Greece, June 25 – July 4. A girl that many people thought would live a life of struggle and obscurity now has the opportunity to win a special Olympic medal. The trip to Greece is made even sweeter by an earlier missed opportunity. Emilda¹s talent qualified her for the 2009 Shanghai Special Olympics but financial difficulties made it impossible for her to attend the Games.

As big a hurdle as her disability has been, Emilda’s journey to Greece was nearly made impossible by her family’s poverty. Her father earns just $6.25 (USD) per week.  Knowing that they couldn’t afford the necessary bus fare to travel to a training facility, Emilda and her mother regularly ran to the Iloilo City Sports complex. On days that they didn’t make the journey, Emilda ran around the cemetery. With the pressure of poverty weighing heavily on the family, her parents feared that Emilda would never be able to demonstrate her talent beyond her local community.

But as her story began to make its way through Compassion International staff workers around the globe, something amazing happened. The story of the teen began to impact those close to home as well as those in far-flung places. In her home village of Iloilo, a squatter community in the Philippines, many people search through dumpsites scavenging for valuables. Though Emilda was teased for most of her life about her mental disability, she has now given hope to her community. The poor community sees that if Emilda can go to Greece, there is no limit to what God can do—even in Iloilo.

Across the world, people began to hear about Emilda and her opportunity to participate in the Games in Greece.  Inspired by her story, hundreds of people from Uganda, Canada and the U.S. raised the necessary funds for her trip. This month, Emilda, her mom and her Compassion program director will head to Greece, carrying with them the encouragement of supporters from around the globe.

At the Special Olympics, Emilda will represent the Philippines in Athens.  But she will also represent something more than one community, disability or country.  She will represent the one billion vulnerable children who live in poverty. Emilda demonstrates that every child is unique and deserves a chance to thrive.

We hear a lot about what’s wrong with the world. Stories like that of Emilda remind us that people aremore than the labels we put on them and it doesn’t take much to be part of a miracle.  By championing a child in poverty, we can all be part of the next inspiring story.

Prayers for Hope and Comfort

Check Out How You Can Help Others 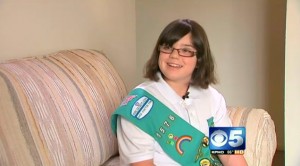 By Dave Halliday
archives most recent
search this blog
error: Content is protected !!