In the Old Testament, Ruth chapter 2, we see a great example of Godonomics. His name is Boaz, a rather wealthy land owner.

1 “There was a relative of Naomi’s husband, a man of great wealth, of the family of Elimelech”

He is such a successful producer that he is able to both hire lots of employees (reapers for his field), as well as leave the corners of his fields for the poor and needy. Ruth and her mother-in-law are in financial trouble, but are allowed to “work” for their food from the percentage of his field that he left available to the needy. Notice that even in this model, we see Boaz as an example of prosperity and generosity to those in need; however, as he helps the poor, he still requires them to work for their reward and incentive. Ruth, comes ready to work (glean) and asks Boaz’s employees for permission (respecting his property rights).

His name was Boaz. 2 So Ruth went and gleaned in the field after the reapers. And she happened to come to the part of the field belonging to Boaz, who was of the family of Elimelech. 7 And she said, ‘Please let me glean and gather after the reapers among the sheaves.’ So she came and has continued from morning until now, though she rested a little in the house.

As a boss, Boaz is respected by his employees. He treats them with respect, provides a means for income, and a way for them to be generous with his money, as well as their own.

4 Now behold, Boaz came from Bethlehem, and said to the reapers, “The LORD be with you!” And they answered him, “The LORD bless you!” 5 Then Boaz said to his servant who was in charge of the reapers, “Whose young woman is this?” 8 Then Boaz said to Ruth, “You will listen, my daughter, will you not? Do not go to glean in another field, nor go from here, but stay close by my young women. 9 Let your eyes be on the field which they reap, and go after them.”

Although Boaz is often generous to the needy, he goes out of his way to reward her hard work. He doesn’t treat everyone who comes to him equally, but fairly. And his special treatment is the reward for her hard work and her selfless generosity to her mother-in-law. Notice how the concept of both repayment and reward are on his mind, as he speaks about her reputation in the town.

11 And Boaz answered and said to her, “It has been fully reported to me, all that you have done for your mother-in-law since the death of your husband, and how you have left your father and your mother and the land of your birth, and have come to a people whom you did not know before. 12 The LORD repay your work, and a full reward be given you by the LORD God of Israel, under whose wings you have come for refuge.”

Godonomics is about liberty, prosperity, and generosity. It values property rights, pays people fairly not equally, and understands that reward and incentive are critical for both employees and those in need.  God’s wisdom challenges us to steward the talents and opportunities we’ve been given to make lots of money and give generously to the poor and needy.  Godonomics transcends politics and labels. Some might call Boaz an “evil-conservative” big business rich guy because of his wealth. Others might call him a “bleeding-heart” liberal who champions the cause of the poor, the downtrodden, and the hurting.  God calls him a faithful steward. 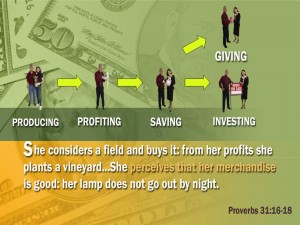 God and Money: Why Work Can Be Filled With Purpose
archives most recent
More from Beliefnet and our partners
previous posts