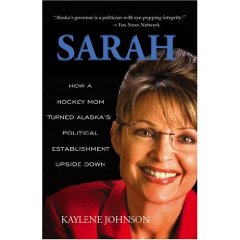 There’s been lots of confusion and questions about Sarah Palin’s faith life since John McCain picked her as his running mate last Friday. God-o-Meter caught up with Kaylene Johnson, author of the new book Sarah: How a Hockey Mom Turned Alaska’s Political Establishment on Its Ear to set the record straight. An important note: Johnson’s book covers the period up to Palin’s 2006 election as governor of Alaska, so she didn’t have much information about the role that religion or religious groups has played in her role as her state’s chief executive.

Sarah Palin was baptized as a Catholic but became active in the Pentecostal Assemblies of God church while still young. How did she go from one tradition to the other?

It was through her mother, Sally. Sarah was baptized as an infant in the Catholic Church. And her mom discovered a more meaningful experience at an Assemblies of God Church in Wasilla, where Pastor Paul Riley had really formed a community. And Sally enrolled her kids in church camps and Bible school. This was when Sarah was about 12. She asked to be re-baptized. The whole family was baptized at the same time, at a lake right here in Wasilla called Beaver Lake. I don’t know that her father was baptized–it was a mom and the kids. It was a milestone that Sarah never really forgot. She knew she claimed a moral compass that would stay with her.

Was that pastor–Pastor Riley–a major influence in her life? Can you talk about him?

Pastor Riley and his wife became lifelong family friends to Sarah because she grew up in that church. Now he is retired and serves as a chaplain in jails. They are known for taking people in, including–sometimes–prisoners that Pastor Riley ministers to. He was at Wasilla Assemblies of God for 44 years.

How active did Palin become in the Assemblies of God once she was re-baptized?

She was active in high school. She used to sign her yearbook with Bible verses. She was the leader of the Fellowship of Christian Athletes at her high school. She was a basketball star, and as a junior her team went to a state tournament in Juneau and they lost a really close game. The coaches told me a story about the game, where the following morning the coaches met for breakfast and they didn’t see the girls. They waited for the girls to come down from their hotel rooms and wondered if they had stayed up all night and partied. And the coaches got up to walk out and saw the girls walking back from somewhere. They had Bibles in their hands. They’d gotten up early to go the church. And Sarah Palin was kind of the ringleader. It was pretty telling.

Today she attends an Assemblies of God Church in Anchorage and a nondenominational church back home in Wasilla, right?

It’s a Bible church that she attends in Wasilla, a nondenominational church. So her faith tradition is eccentric in the sense that she’s a Christian but doesn’t hold one tradition in higher esteem than the other.

How does her faith influence her worldview and politics?

It’s really central to who she is and how she views the world and her job. One of the things I felt with talking with her is that, unlike with a lot of politicians who are running for office, there’s not a sense of political ambition as much as there is a sense of service. I think that’ s unique. She comes at her job as a servant.

But how do her religious beliefs shape her policy views?

I can’t talk about how her faith influences policy because I haven’t spoken with her about that specifically.

Adding Palin to the ticket has helped McCain excite religious conservatives a couple months before Election Day. Did she make her faith and values an issue in her campaign for governor?

Her faith didn’t play a big role. It’s a very big part of who she is but she’s also very private. It’s not something she uses as a campaign tool. I don’t think she would hold it secret at all if asked about it directly. She would freely speak her mind about it. It would be interesting to see how she responds to that question because it’s such an important part of her life.

Palin has become a darling of the nation’s conservative evangelical leadership. Was she close to that community in Alaska? Did they play a big part in her election as governor?

No, not really. I would not say that I was sort of amused [by Palin’s rollout as a family values candidate] because she is a family person and is not shy about saying so. But it’s not something used in her campaign. Her campaign was really about her call for ethics in government. That’s what clinched the deal.