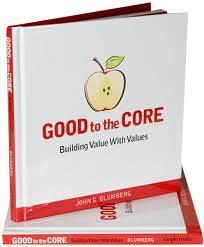 A story from Good to the Core:  Building Value With Values by John Blumberg

I was in Honolulu to speak for a large national conference. I scheduled an extra day onto the trip since I had never been to Honolulu and because a few great friends were also at the conference.

Upon our return to the hotel, I had some time to spare before departing to the airport. A couple of my friends and I decided to rent a raft large enough to hold three adults. We targeted the white-capped waves, out in the distance, as our destination.

With the incoming waves, we had a hard time getting away from the shore. At first, there seemed to be enormous momentum keeping us grounded. Slowly, but surely, we began to make progress. It seemed to get easier. We eventually got within a few feet of the whitecaps and decided to board our raft and relax as a celebration of our efforts.

We immediately abandoned the raft and grasped for safety, with one arm holding the raft and the other arm aggressively swimming. I have never scissor-kicked so hard in my life.

Twenty minutes later we had made minimal progress.

Out of nowhere, a lifeguard on a kayak appeared on the scene asking why we were so far out. Feeling the comfort of his presence, we laughed, for a moment, lightly commenting about our distance from the shore. He wasn’t laughing.

“You see those big orange balls on top of the water?”, the lifeguard inquired. We could see them, but they didn’t look very big from where we were still struggling in the water. They did, however, give us the insight that we were basically five times farther out than we should be.

I think the guard was trying to teach us a lesson. He didn’t leave us, but he didn’t assist us either. Forty-five minutes later we walked up on the shore. I was shaking from exhaustion. I began, for the first time, to feel the numerous cuts on my legs and feet from the sharp coral rocks lining the ocean floor.

We had briefly noticed the orange balls on our way out. We had paid little attention to them and certainly had not given any thought to their significance. We had been too focused on our mission to get to the white-cap waves in the distance!

The orange balls had warned us and we unknowingly ignored them. Infrequently placed across the oceans surface, they created an invisible line on the oceans floor. They silently warned us not to drift beyond them regardless of our vision or mission.

We don’t go running away from our values. We go drifting away, and one day wake up in a place we never meant to be, drifting in a direction we would have never chosen.

To learn more about Good to the Core or to look inside this great book, please click here!