Lessons in Purpose and Leadership From the Civil War 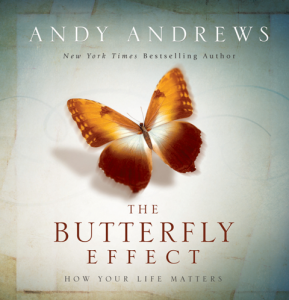 The following is an excerpt from “The Butterfly Effect: How Your Life Matters” by Andy Andrews

He was a thirty-four year old schoolteacher, but on the hot, humid day of July 2, 1863, Joshua Lawrence Chamberlain was in the fight of his life.

A former professor of rhetoric, he was now a Colonel in the Union Army. Chamberlain stood at the far left edge of a group of eighty thousand men strung out in a line across fields and hills, stretching all the way to a little town named Gettysburg.

Earlier that day, a Colonel Vincent had placed Chamberlain and his men of the 20th at the end of that line, saying,

“Whatever you do, you can’t let them come through here.”

Chamberlain couldn’t withdraw and he knew it. If the Confederate Army overran them, the rebels would gain the high ground, and the Union Army would be quickly defeated. In essence, eighty thousand men would be caught from behind on a downhill charge with no protection. To win, the grey clad Confederates would have to come through Chamberlain.

At 2:30 p.m., the first charge came from the 15th and 47th regiments. They attacked uphill, running as fast as they could and firing at Chamberlain’s men who were stationed behind a rock wall they had thrown up that very morning. The 20th stopped the rebel charge and pushed them back down the slope…

Only to face a second then a third charge!

On the fourth assault, Chamberlain was knocked down by a bullet that hit him dead center-in the belt buckle. Realizing that he wasn’t seriously hurt, the Colonel scrambled to his feet, continuing to fight. Again, they halted the enemy’s charge and again, the rebels retreated down the hill.

At that time in history, battles were fought with artillery and small arms ammunition.

The struggles were close, face-to-face affairs. With their fourth charge, the Confederates almost made it to the wall-a thigh high stack of flat rocks that ran almost one hundred and ten yards in length.

As they waited for the next charge, Chamberlain felt sorry for his men. He later recalled, “Their leader had no real knowledge of warfare or tactics. I was only a stubborn man and that was my greatest advantage in this fight. I had, deep within me, the inability to do nothing.”

Chamberlain continued, “I knew I may die, but I also knew that I would not die with a bullet in my back. I would not die in retreat. I am, at least, like the apostle Paul who wrote, ‘This one thing I do, I press toward the mark.'” 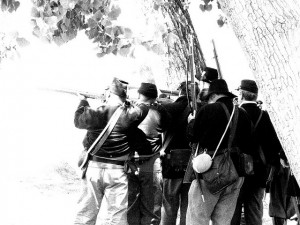 The attack came again. On this, the fifth charge, the 15th and 47th Alabama broke open the wall and fighting raged on both sides. Without time to reload, the men were swinging their rifles at each other and brawling with fists and knives.

Somehow, the 20th Maine pushed the rebels downhill another time.

After that fifth broken charge, Chamberlain’s younger brother, Tom, appeared with Sergeant Tozier, an old, hard-nosed soldier. Tozier had a thick wad of torn shirt stuck into a hole in his shoulder where he had been wounded.

“No help from the 83rd,” the Sergeant said. “They’re shot to ribbons and all they can do is extend the line a bit. We’re getting murdered on our flank.”

“Can we extend?” Chamberlain asked.

“There’s nothing to extend,” Tom answered. “More than half our men are down.”

It was true. Chamberlain’s command had started in Bangor, Maine, six months earlier, with a thousand men. They’d started that morning with three hundred. Now they were down to eighty.

“How are we for ammunition?” the Colonel asked.

“We’ve been shooting a lot,” was his brother’s answer.

“I know we’ve been shooting a lot,” Chamberlain snapped. “I want to know how we’re holding out. How much ammunition do we have left?”

As Tom ran to check, a twelve-year-old lookout had climbed a tree. He yelled, “They’re forming up again, Colonel!”

Chamberlain looked up to see the boy pointing down the hill. “They’re forming up right now. And they’ve been reinforced. Sir, there’s a lot more of them this time.”

At that moment, a messenger stumbled into their midst. Out of breath, he said, “Sir! Colonel Chamberlain, sir! Colonel Vincent is dead.”

“Are you sure, soldier?”

“Yes, sir,” he gasped. “He was shot right at the first of the fight. They were firmed up by Weeds Brigade, but now Weeds is dead. They moved Hazlett’s Battery up top. Hazlett’s dead, too.” 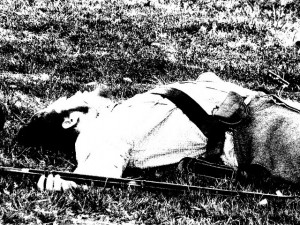 Chamberlain’s brother came running back. “Joshua,” he said, “We’re out! One…two rounds per man at the most. Some of the men don’t have anything at all!”

Chamberlain turned to a thin man standing on his right. It was First Sergeant Ellis Spear. “Spear,” he ordered, “tell the boys to take the ammunition from the wounded and the dead.”

“We did that last time, sir,” Spear replied. “Maybe we should think about pulling out.”

Chamberlain responded grimly, “We will not be pulling out, Sergeant. Carry out my orders please.”

“Colonel!” Sergeant Tozier spoke up. “We won’t hold them again, sir. You know we won’t!”

Chamberlain stepped to the top of the wall in full view, crossing his arms and staring down at the advancing enemy.

The 15th and 47th Alabama with their pale, yellow-gray uniforms, now reinforced by a Texas regiment, moved up the hill as their high pitched shriek-the rebel yell-coursed up toward Chamberlain and his men. Sergeant Spear was standing at the Colonel’s feet. Sergeant Tozier, Chamberlain’s brother Tom, and Lieutenant Melcher, the flag bearer, were huddled below. “Joshua!” his brother said. “Do something! Give an order!”

Chamberlain stood there for a moment, deep in thought, quickly sorting the situation. “We can’t retreat,” he thought. “We can’t stay here. When I am faced with the choice of doing nothing or doing something, I will always choose to act.” He turned his back on the advancing rebels, looked down at his mean, and said, “Fix bayonets!”

At first, no one moved. They just stared at him with their mouths open.

“Fix your bayonets now!” he commanded again. “Execute a great right wheel of the entire regiment. Swing the left first. Do it now!”

Lieutenant Melcher spoke first, confused. “Sir,” he asked, “What is a great right wheel?” But the Colonel had already jumped from the wall and was moving to the next group of men. Sergeant Tozier answered the question.

“He means to charge, son. A great right wheel is an all-out charge.”

Then, turning, the Colonel pointed his sword directly downhill. Facing overwhelming odds, Chamberlain slashed his blade through the air and with a power born of courage and fear, the schoolteacher from Maine roared, “Charge! Charge! Charge!” to his men.

The remaining eighty fighting men lifted their voices to match that of their leader. “Charge! Charge!” they cried tumbling over the wall into a history about which most people in our country have never heard.

For when the Confederate troops saw Chamberlain, the leader of the opposition, mount the wall they immediately stopped, unsure as to what was happening. And when the Colonel pointed his sword toward them and commanded his men to charge, they turned and ran. Many threw down their loaded weapons.

The rebels were certain that these were not the same soldiers they had been facing. Surely these men have been reinforced, they thought. A beaten regiment would not charge. In less than five minutes, Chamberlain had his sword on the collarbone of a Confederate captain.

The man turned around a fully loaded Navy Colt revolver and offered it to Chamberlain. “Yes sir,” he answered. “I am.”

Within five more minutes, that ragged group of eighty men under Chamberlain’s command-without any ammunition-captured over four hundred soldiers of the enemy.

It is an amazing story, isn’t it? And absolutely true. But here’s what most people never consider…

Historians have determined that had Chamberlain not charged that day, the rebels would have won at Gettysburg.

Further, historians tell us, had the rebels won at Gettysburg, the South would have won the war…and the war itself would have been over by the end of the summer.

Most people assume that had the South won the war, today we would exist as two countries, The Union and The Confederacy.

Historians, however, insist that if the South had won the war, we would now live on a territorially fragmented continent much like Europe-North America would be divided into nine to thirteen countries.

When Hitler swept across Europe in the 1940s, had Chamberlain not charged on that afternoon so long ago, there would not have existed a United States of America to stand in the breach.

When Hirohito systematically invaded the islands of the South Pacific, there would not have been a country big enough, strong enough, wealthy enough, and populous enough to fight and win two wars on two fronts at the same time.

The United States of America exists as it does today because of a single man.

One thirty-four year old schoolteacher and one move he made more than a century ago.

Don’t you see? Joshua Lawrence Chamberlain is a human example of the butterfly effect. One man who made one move whose effects still ripple through your life today.

And you are no less an example of the butterfly effect than Chamberlain was.

Everything you do matters. Every move you make, every action you take…matters.

Not just to you, or your family, or your business, or hometown. Everything you do matters to all of us forever.

If you’d like to read more inspirational stories about your life’s purpose, get “The Butterfly Effect: Why Your Life Matters” in the Inspired Faith Gift Store from Beliefnet.