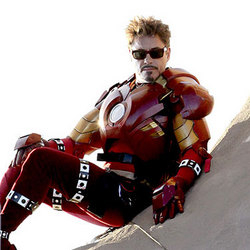 At one point in Iron Man 2, Tony Stark, a.k.a. Iron Man is swilling green liquid. Someone asks him what’s in the bottle and he says, “Chlorophyll.” A little “woot!” for green foods went off inside me and I turned to my boyfriend and said, “Remind me to blog about that!”

So blog I am! In the movie, Tony/IM has just tested his blood with a device smaller than an iPod Nano, bigger than a Shuffle–a gadget I’ve fantasized about for years. He just places it over a finger, presses, and it pricks him and checks his blood–kind of like a glucose meter. Because the Palladium in his chest unit thingy (the portable arc reactor) is toxic, he needs to keep an eye on such things.

After a digital read-out says “Blood toxicity: 18%” we see him drinking chlorophyll from clear plastic bottles. It’s either not working or that nuclear generator of a heart is just uber-toxic, because his levels continue to rise throughout the film, even though he’s up to 80 ounces of green stuff a day.

It’s such a great modern parallel to Popeye’s spinach: In today’s toxic culture, our superfoods merely counteract the chemicals we’re bombarded with just to maintain stasis. If you want a superhero strength boost, you’ll have to use technology. Interesting, yes?

So assuming chlorophyll is a detoxer–which is, of course, debated–how does it work?

Chlorophyll is the stuff that makes plants, algae, and some bacteria green. It’s an essential part of photosynthesis, the way plants convert sunlight into energy.

Where to Find It

It’s also hugely present in chlorella, blue-green algae, and spirulina, all available in pellet, powder, and liquid form. Since Iron Man’s bottle looked suspiciously similar to the Sun Chlorella granule packets I mix with water at work, that’d be my guess for what he’s swigging.

In addition to being anti-carcinogenic, according to the NIH, many other claims are made for chlorophyll–that it oxygenates the blood, flushes out cells, regenerates cells, neautralizes toxins, creates an alkaline blood environment, helps us assimilate heavy metals (Palladium, anyone?), and more. For decades vegetarians and raw foodists have been espousing its benefits.

How to Consume It

Obviously check with your doc before doing anything I utter, but spirulina, chlorella, and blue-green algae come in many different forms, and most healthfood stores sell concentrated liquid chlorophyll you can add to beverages. Any of the veggies above are great to consume assuming you’re not allergic, just make sure not to overcook them–when that beautiful green color goes, so does your chlorophyll.

Those of us who have been aware of the goodness of green for years are deeply excited–as one raw food Twitterer tweeted about the film: “GREEN food is going mainstream!”

UPDATE: Awesomely enough, the idea for the chlorophyll was entirely Robert Downey Jr.’s, a supplement and health food nut. This from an interview with E! Online:

“In the sequel, Downey’s constantly swilling chlorophyll, the stuff that makes plants green. His idea, too. ‘I Googled it, and it said if you have any radioactivity overload,’ he tells E! News, ‘then chlorophyll will combat it.’ Handy tip–if you happen to have a nuclear battery in your chest.”

Cool. I’ve read that too, and it’s why I always get a big fat green drink after my annually mandated CT scans. I like the confirmation that this may actually be doing something–even if it’s based on a Google search.