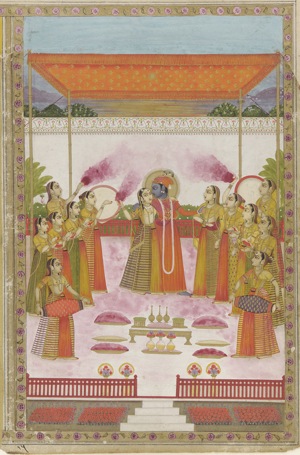 Trudi Levine, a New Yorker, has been in India for 5 months, volunteering at a women’s organization in Lucknow. She recently traveled to the epicenter of Holi, the gorgeous Hindu spring festival of colors, celebrated on March 1. Here are her impressions…

If you are someone who enters Fairway or Zabar’s on Christmas or New Year’s Eve day and gets piqued…stay away from Holi.

If you have any personal boundaries….stay home.

If you have a need for control (such as getting to a destination) ….don’t go out for three days before HOLI.

Colours are tossed, dumped, thrown, rubbed, hurled, scattered, shot, bucketed, on ….faces, hands, hair, arms, breasts, inside shirts…front and back, legs, mouth  (ears covered with cotton), eyes…in short…EVERYWHERE. It was NEVER about being anywhere, but rather in the trying to get there.

We had been planning on going to Varanasi and were informed (after having discussed this for three weeks) that it was a really bad idea as celebrants are wont to rip off clothes and do whatever with no constraint. A groundswell of opinion with firm admonitions and faces stern and forbidding became compelling.  Go to Mathura, birthplace of the Krishna, and Vrindaban, where he grew up. This is the epicenter of Holi.

Drive passes in a flash and we find our hotel, eventually, which is at a crossroad between Matura,  Vrindiban and Govindam and right across a huge temple complex around which are milling, moving, mixing hordes of people.

Check in and take off, first to this temple complex into which we are invited and welcomed to a balcony overlooking the seated be-coloured women and children and more subdued men, all awaiting their 109- year-old guru.  As far as the eye can see, and as we climb the tower and our eyes take in more, there are even more souls awaiting…

We head for Matura, following the sign for the city (silly thing to do
as it takes us 40 minutes when the direct route out of our hotel is
2K.Hotel is unhelpful in that they seem totally ill equipped to deal
with the needs of tourists.  Makes sense I guess….they are, after
all, a hotel!

Back to the car to make it to Vishram Ghat for
AARTI (this is when we still thought we had some control at the
margins). Not only are we sent to the other side of the Yamuna River,
but we have the distinct impression that a) our driver is getting a
really hard time because he is Muslim and b) the goal of the ‘helpers’
is not to get us where we want to go, but rather to get us into the
clutches of some ‘guide’.  We do get to the GHAT just as AARTI ends.
But, for a fee, the priest comes and  blesses, chants, intones and gets
formed words to emanate from my mouth comprised of sounds I didn’t know
I could make.

Our driver is a sweetheart. He makes herculean
efforts to get directions wherever we are going (and in India that is
monumental).  The fact that we get ‘there’ either late or ‘not at all’
is really never the point.  The more we ‘try’ the funnier he finds
us…topped only by our bodies being covered in colour, sliding into
his plastic covered car.

We call it a night…have dinner, with
plans for 5:30 am for Govindam to visit the mountain which Krshna
lifted and to visit the temple.

At some point, no more
movement in the traffic….buses with more people than any axle should
ever need contemplate, cars, vans, all emptying their contents of human
flesh onto the street and the bodies can make their way through the
abandoned vehicles to …..to…..to….well we may as well
follow….and we do.

Perhaps the mountain is there, and it
could be that at the fork in the road (where no one could tell us a
thing) it was the path not taken, instead we head through a narrow road
following the mass (of men) and facing the retreating mass (of men).
This is our first HOLI experience and it is much less pleasant than
will be the following day (in my estimation).  More powder thrown into
faces and Molly gets it in her eyes.  The tears help to clean it out
and my bandana becomes the ‘handiwipe’ of choice.

We arrive at
the temple, which is surrounded by water in which people are stripping
and bathing and as I  look at the water, I assume, to get dirtier. The
temple itself, as one moves closer to the inner sanctum, throbs with
the passions, ecstasies and laughing/crying hysterias of men hurling
water, milk, flowers, themselves. We stay on the rim.  Molly has had
one too many men grabbing her breasts and we head out.

I have
my walking stick and I suggested I walk behind her with my ‘pole’…it
worked! No one touched her….(“though she be but little, she is
fierce!”)

We rest for an hour and a half and then head back to Mathura, hoping to return to the fabulous street and the Vishram Ghat….

We
did get a half a block from HOLI Gate (yes, the Times Square of HOLI)
after having tasted some great candies and stopping at a jewelry store
where Molly’s horoscope coincidentally came out with her needing a
yellow sapphire (the very same one in front of her) to balance out her
sun in Jupiter.  We were sooooo surprised!  Was beautiful and I had
fantasies myself, but too much right now for a spontaneous purchase.

Warned
that if we went any further we would be inundated [by coloured
powders], we didn’t want to leave…we didn’t want to stay. Dan looks
up and sees ‘the press’ on the second floor of the corner building we
wave, gesticulate and allow our bodies to plead for
refuge….SURE….They send someone down to get us and we have the
vantage point for the parade which follows.

We choose to not
go out at midnight for the bonfires as it’s clear (as there were no
women on the street for the parade) that it would have been unwise.

However,
this does not stop us from heading out to Vrindban on Holi morning. We
get out of the car and traverse what we later realize is maybe 100
yards and we are pretty covered.  By in large it is men plastering
pasted powder on our faces (breasts become part of the face-pasting
experience) and some over the head….almost none thrown as the day
before in the face. Down our backs and our fronts (my stomach still
green and red and undergarments kaleidoscopic) and hair which becomes
like steel wool.

After this onslaught we see a vision ….a
white, pristine temple and we seek refuge.  Hari Krshna…and
everything is context. There is none of the feeling/reaction of airport
Hari Krshnas;  instead there are beautiful men dancing, alone, with
each other, with their god, to chanting, kirtan, which, along the
beauty of the temple, ferret out every dark cobwebbed corner of psyche
and soul and  ‘just rocks.’  As young women are not out Holi morning,
older women get up to dance and this becomes the first place I’ve seen
in India where older couples were actually touching each other!

Assured
that there were no powders in the Temple, we sit in the courtyard
watching families and individuals leave at the closing time in the
temple, and man after man comes and covers us once again.  We are ready
to go, but our shoes are now locked in a cupboard which can be opened
only in three hours. I figure, either they will find a key…or
not…so I ask for a nice place to sit and chai. They do eventually
find one and we return for a nap.

We return to Vrindaban and
there is no more colour, at least not flying through the air. But
colour!!!! Everyone is out on the street and women, who have been home
all day, reclaim public space and there is colour galore.

We
then go to Bankey Bihari Temple, which is considered to be one of the
holiest of the Krshna Temples, with the God not having been created by
human hands, but rather by the god himself.

“Also he wanted his
beloved lord to be in front of his eyes always. Granting him his both
wishes, the couple turned itself into one single black charming idol,
the same one that you see in the temple today. The charm and beauty of
Shri Banke Bihariji is the only reason why the ‘darshan’ in the temple
is never continuous but is broken by the curtain drawn on him
regularly. It is also said that if one stares long enough into the eyes
of Shri Banke Bihariji, the person would lose his self consciousness.”

There
was the experience of seeing the ‘god’, but the better experience was
facing out to the crowd as the curtain rose and they were transported.
Old,  very old and ancient souls lit up, younger men prostrated
themselves, but what was clear for all was there was nothing between
them and their god.

We return home to Lucknow, tired, hot,
stiff. I go to the park and it is full of families, children, couples,
as the holiday still lingers as a sweet taste.  I walk a few blocks and
try a new street food which resembles a bean burrito…..yum.  The
night is hot…the day sizzles in the 90’s and it is now officially
spring.

Fresh Morning: Be Nice to You
archives most recent
More from Beliefnet and our partners
previous posts