No More Reiki at Catholic Hospitals? 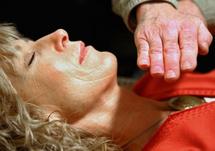 Last March, the US Conference of Catholic Bishops released a statement calling the ancient Japanese healing practice of reiki “superstition” that “finds no support either in the findings of natural science or in Christian belief.”

The issue largely disappeared from most headlines after the initial buzz, but it re-emerged this week as the Boston Globe reported that a number of Catholic hospitals are banning the practice and shutting down existing reiki treatment centers within their institutions.

The NIH is currently funding a study on whether the 1.2 million Americans who have had reiki treatments can legitimately claim that the practice has helped them reduce stress and heal other ailments.  The Globe article also quotes mind-body medical pioneer Dr. Herbert Benson, who said that he was unsure of whether reiki offers clinical stress relief, or if it initiates the “placebo effect” among those who believe in its power to heal and relieve.  In any event, both scientific and religious minds are focused on reiki.

To me, this debate may be the front line of the battle between alternative and conventional medicine.  Hearing of the 7-year-old volunteer wellness clinic that was closed in Merrimack, NH, or the woman whose knee surgery recovery was aided by a now-defunct reiki program, is upsetting, and even hackle-raising at a time when covered health benefits all seem to be on the chopping block.

Now, granted–I’m not a Catholic, so I can’t speak to the ways in which bishops’ statements may–or may not–affect how I feel about a particular healing tradition.  I also have only had a reiki session once, and though I felt relaxed afterwards, I can’t say that it changed my life.  But I do believe that the human body is a mystery, and the best and most effective health providers are those who allow patients access to healing modalities that might not come from the pharmacy or the lab.

What do you think about Catholic hospitals banning reiki?  Do you see it as part of a larger mind-body medical conversation in American health care?