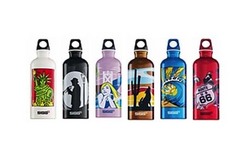 Sigh. A while ago, my friend Jenn from the Tiny Choices blog expressed skeptism that SIGG bottles were all that safe, preferring to sip from glass or stainless steel. But I was like, “Oy, really? Another thing to worry about? But my SIGG is so pretty!” She said that SIGGs have a lining to keep the aluminum from leaching and that the Swiss company refused to tell anyone what was in it, calling the info “proprietary.”

And now, turns out, until last August those linings had trace amounts of Bisphenol A in them, a hormone-disrupting ingredient in a lot of plastic. The very chemical we all dropped Nalgene for SIGG in trying to avoid. In public statements and interviews, including one with the Calgary Herald, SIGG copped to the ingredient. The company sounds especially hair-splitting and lame, with CEO Steve Wasik writing: “The primary reason that I am writing this letter today [i.e., fessing up to the BPA] is because I believe that the BPA conversation has changed dramatically in the last 12 months. Last year, the primary concern was that of BPA leaching from bottles. Since that time, the dialogue has evolved such that now some people are concerned about the mere presence of BPA.”

Um, what? What conversation was that, exactly? Was it the one in which you successfully begged an environmental group to be removed from the BPA-containing list, knowing full well the “mere presence” was in the epoxy coating of all your bottles? Or the one where you knew that your brand was built on being a safer alternative to Nalgene (which has since removed BPA from its products) and willfully withheld info to the contrary?

Well, SIGG did fess up and gets points for that (but am I uber-cynical to question their motives for doing so? Were they about to be outed anyway?) and yesterday they stopped shipping bottles with BPA lining. They’re also offering a free exchange to anyone who mails in their old bottles. (Fascinated to see how those logistics will work!) And those evolved Canadians, who have a ban on BPA-containing products for infants, are already yanking the bottles from the shelves–Canadian Whole Foods is offering a full refund on returned SIGGs.

By many accounts and tests those old SIGGs are perfectly safe. They do have BPA, but they have not been found to leach. Plenty of us will keep swilling from SIGGs and be just fine. Treehugger.com has a survey, Are You Throwing Out Your SIGG?

If you’re not a bottle geek this may sound like a bunch of eco hand-wringing. But research on BPA is well-documented and pretty conclusive. If the stuff is leaching, it’s toxic–correlating to everything from breast cancer to ovarian problems to neurological issues. And yet, it’s still perfectly legal in this country–though legislation is pending in many states, especially regarding the chemical in products for babies (sippy cups and the like), who are especially susceptible. Here’s some more info on the BPA issue: http://www.treehugger.com/files/2008/09/fda-not-listening-on-bpa.php

My feeling is if we know something isn’t safe–even the FDA made suggestions for how we can lower our exposure–why eat or drink it? Since there are enough things that are question marks in terms of disease, why not at least take a step away from the known hazards? The FDA suggests avoiding plastics with the number 7 stamped on the bottom–many of them contain BPA–and unlike SIGGs, do leach, sometimes significantly. And most definitely do not microwave such plastics, which causes them to leach. As for bottles, stainless steel requires no lining, does not leach anything, and is the wave of the future. Seems like the safest non-breakable choice we’ve got.

If you’re concerned, or just annoyed, here’s an FAQ snippet from Reusablebags.com, a company that sells SIGGs, on what to do with your old SIGG:

“I’ve read the test results and safety information posted here an on SIGG’s website and I still want to return my bottle with the former lining – what do I do?

While the former liner has been tested to be non-leaching, we understand that some people may still wish to return their bottles. Please compare your bottle to these photos to determine which liner you have. If you wish to return a bottle with the former liner, contact SIGG’s customer service at info@mysigg.com.”

Thoughts? What do you drink from?

Fresh Morning: How Much Sleep?
archives most recent
More from Beliefnet and our partners
previous posts