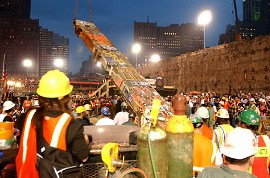 As more years unfurl between us and the events of September 11, 2001, I’ve heard an increasingly louder cry each anniversary of “Enough!” Comments on Beliefnet and other sites say over and over that it’s “time to move on,” that we need to “get over it.”

I hear that. Each year newscasters appear to be increasingly stretching their care muscles and the political juice is wrung out a little bit more as public officials try to brand themselves compassionate by saying 9/11, 9/11, 9/11 as much as possible. It’s gotten so big and intrinsic, talk about heroes and pride and loss and courage can seem like part of the larger info droning. We’ve become almost immune to the repetition and cynical about the motives of the repeaters, so it all feels like a big, American-flag-draped drag. I’m guessing.

I feel that too. But there are other kinds of remembering. I’m a native New Yorker. One who almost was amongst the 2,750 killed that day. And though I’m almost tired of my story, I still need to remember: I was late for my temp job on the 100th floor of the South Tower. I know five of the 175 people who died at the company I was working for. I saw the first building on fire as I stood below, gazing up in shocked, still motion. I heard the second plane hit as I hustled north. When the buildings fell I was a mile away and heard people watching them dissolve to dust, screaming. My neighborhood was full of smoke for weeks; I stayed with a friend. Then a few months later I temped for a while next to Ground Zero in an office never properly cleaned of that toxic gray powder. My desk had a view of the pit. And three years after that I was shockingly and suddenly at the age of 31 diagnosed with lymphoma–one of the two blood cancers that have surged in incidence in first responders since 9/11.

So, let’s just say I’m not really over it. I think I am sometimes. Not having lost a beloved, I have the luxury of letting go. I tend to tune out the drone. But then, I’ll walk near the space on my way somewhere else, or around it, or within 15 blocks of it and I start to get this skin-raising dread and nausea. My lungs get scratchy. I feel like I want to run.

Last year, a week or so before the anniversary, I walked with a non-New Yorker friend downtown. We climbed the stairs of the Winter Garden and gazed over the pit. The energy was still heavy, intense, raw, unpeaceful. A sign hanging outside Century 21, in giant lettering you could only see from that vantage read, “Fall Into Fashion.” Seriously. We held hands as we walked the bridge across the pit. I closed my eyes and, overlaid on the disaster, I saw roses over the whole scene. Layers and layers of petalled grace that had been sent to this place by thoughts, by prayers, by who knows what. Roses absorbing the toxins, roses embodying grace, roses smelling subtly, sweetly, blessing the whole awful, still-excruciating mess. Then the image faded and I had to get the hell out of there.

This week workers brought a 36-foot steel beam back to the site. The “Last Column” helped hold the South Tower and was the final piece of debris to go seven years ago, marking the end of the recovery. Covered in grafitti, blessings, union stickers, and engine numbers, it was a makeshift memorial for workers who removed smoking remains for eight months. It will be in the 9/11 memorial museum, which will also house a crushed fire truck and five stories of the trellissed steel fronting from each building. Plus diaries from witnesses, first-responder masks still covered in that silt (hermetically sealed), and lots of other artifacts.

A “forest of oak trees” is planned for the area over the underground museum. Though I will still keep a wide radius in my downtown travels–some ground is permanently hallowed–the raw memories mixed with the suggestion of new life is something I also won’t get sick of anytime soon.

As for anniversary coverage, we can click off the TV, walk away from the computer. and share silence with others–if we mute the noise and rhetoric, maybe it’s possible to remember without overload and “move on” without forgetting a blue-sky, stair-sprinting thing.