How to Cleanse Your Home with Sage 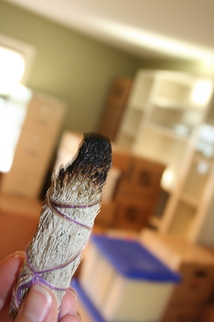 The whole day was a blur of movement, decision-making (where should that table go?), worry (will the sofa fit through that doorway?), and stress (how many hours over the estimate is this going to take?!).  There was excitement too, chirping somewhere deep in the stress maelstrom, but it was hard to hear it.

And at the end of the day, Rob and I were left standing in our house.  To take it to the next level and make it our home, we did an on-the-fly version of a sage smudging, the ancient cleansing ritual used by Native American and shamanic cultures to remove negative energy from a space.

I’m not generally one for shamanic rituals, and I was certainly a little nervous about carrying a smoking stick around our brand new house.  But the move had been so stressful and mind-consuming that I wanted to do something to say, spiritually, that I was grateful that we were starting fresh, grateful to have the opportunity to create a new home in this lovely house, grateful that we were doing this together, and grateful that the “zero hour” was behind us.

In anticipation of this moment, I had asked my friend and colleague Laurie Sue Brockway, who is the keeper of all things inspirational, spiritual, and wise, for a ritual that we could try to close out the move and clear the house for our future life.  She immediately suggested the sage smudging, and told me how to do it.

How to Perform a Sage Cleansing Ritual

1.  Buy a sage smudge stick (mine was white sage and lavender, and I got it at a natural foods store) and find a bowl to hold it over (traditionally, abalone shell is used).  Also set up a cup of water to extinguish it after the ritual.

2.  Open every door and window in your house, and turn on fans if you have them.

3.  Light the stick, and when it catches fire, blow it out and allow the embers to start to smoke (like you would light incense).

4.  Set your intention for each room.  Say a prayer of cleansing.  Laurie Sue suggested, “I cleanse this room of any impurities, negativity, or anything that does  not suit or support the people that live here.”

5.  Walk around the room, waving the sage stick so its smoke drifts into corners, along walls, around windows, and along ceiling lines.  As you do, imagine the smoke absorbing negativity, problems from those who were in the space before you, toxicity, and anything else you want to go away.  See the smoke dissipating and floating out the windows, and imagine that bad energy flowing out of your space, making room for positive, fresh energy.

6.  After you’ve blessed every room, give yourself a sage shower.  Cup your hands over the smoke and “wash” your face with it, then wave it all over your body as you would in a water shower.  Visualize any residual negativity sailing out of your body, out of your home, and into oblivion.

7.  Extinguish the stick in the cup of water or – if your stick was very small or is almost done – flush it down the toilet.  You can also bury it in your back yard (if you are very sure that it is extinguished).

I have to say that I found genuine meaning in the ritual.  I felt like it made the space ours, it cleared away all of the anxiety and stress of the past few weeks, and left us with the opportunity to say, cleanly, we are grateful for this place.  Our place.  Our home.

Have you ever done a sage smudging?

Fresh Morning: The 100 Milestone!
archives most recent
More from Beliefnet and our partners
previous posts