The Marshmallow Study: How Patient Are You? 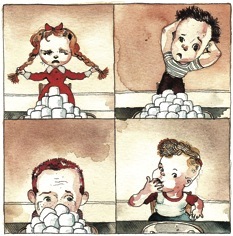 Last week’s New Yorker magazine included an article on what’s known as the “marshmallow study,” a behavioral research project at Stanford University started in the 1960s. In it, four and five year olds were brought into a room and sat in front of a marshmallow. They were told that if they could wait to eat it until the researcher returned, they would be given two marshmallows.

About a third of the kids couldn’t last the 15 minutes, some grabbing the sweet even before the researcher left the room.

A follow-up study done after the kids graduated high school found that the ones who delayed are happier and more successful in their lives. And the ones who grabbed the treat right away are “more troubled, stubborn and indecisive, mistrustful, less self-confident, and still could not put off gratification. They had trouble subordinating immediate impulses to achieve long-range goals,” according to one synopsis of the study.

So interesting, right? The basic premise being: patience is a huge indicator of success. And recently they have expanded the study to figure out how to help kids be more patient because they’ve learned that “delayers” can be converted into “non-delayers” with some basic tools.

It’s mostly a matter of learning to distract yourself from what you’re trying to resist. The kids who sat and stared at the marshmallow with intense focus were pretty much doomed to eat it. And the ones who played with their hair, sat under the table, etc. delayed longer. The scientists are trying to translate this into a curriculum that can be taught.

This has me thinking about the incredible essentialness of patience. Of keeping the long-term in sight. And also wondering about how the idea of delaying gratification jibes with the notion of “being here now.” Were the non-delayers just really present? Probably not, probably just didn’t have the mechanism to manage desire.

And a friend just made an interesting point–sometimes another problem arises when seemingly virtuous delaying results in not moving ahead in life. What do you think? Would you have been a delayer at age five? Or a marshmallow-grabber?

read next post
Honest Tea: Not Such a Lonely Word
archives most recent
More from Beliefnet and our partners
previous posts