Do Beeswax Candles Clean the Air? 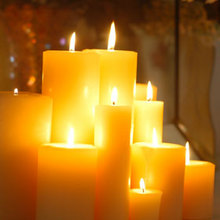 There’s something so soothing about a nice flickering candle–in the tub, at dinner, before bed, or on your altar if you have one. But for years now I’ve been careful to avoid burning anything but soy wax and beeswax because of the polluting nature of regular paraffin candles–both in the larger environmental sense and the home/body toxin sense.

According to an article in the M.D.-written “Nutrition and Healing” newsletter, “paraffin is made from the sludge at the bottom of barrels of crude oil, which is then treated and bleached with benzene and other chemical solvents to ‘clean it up’ for use in candles” and “the soot, smoke, and chemical residue from ‘regular’ candles can stick to walls, ceilings, and ventilation ducts and gets re-circulated whenever the heating/cooling system is in action, exposing you to these pollutants even when the paraffin candles aren’t burning.” Eww.

Not the greenest. But what I learned this weekend when I went to the awesome store Candlestock in Woodstock, New York, is that beeswax candles not only don’t pollute, they may actually clean the air by emitting negative ions. I hit the Googlebrary when I got home and found some info to back this up. One article on Care2.com says, “Beeswax candle fuel is the only fuel that actually produces negative ions, which not only helps remove pollution from the air but increases the ratio of negative ions to positive ions, the ideal and necessary scenario for clean air.” In laywoman’s terms, this means they cause charged gunk (dust, pollen, odors, toxins, etc.) to fall from the air onto the floor via static electricity.

Another site that sells beeswax candles (so take with a grain of wax), says, “a pure beeswax candle burns the dust and toxic fumes from the air as they are convected through the halo’d flame, much like a catalytic converter. The dustier your house, the more ‘black debris’ will be deposited in the wax around the wick.” So interesting! Now I must test for soot on my sweet little beeswax votives.

Beeswax candles also don’t drip, don’t smoke, and because of their high melting point, burn a whole lot slower. They also smell nice, naturally. The “Nutrition and Healing” article even says that “people with allergies, sinus problems, and asthma have reported significant improvement in their symptoms, breathing better and sleeping better after burning the 100 percent beeswax candles in their bedrooms for three to four hours before bedtime. One person who burned a beeswax candle all day when she was home reported that her asthma gradually went away completely.”

Who knows, really? But in your experimenting, you want candles made 100% pure beeswax, preferably the yellow kind that hasn’t been bleached or colored. You can tell by asking and by the smell–they should be sweet and fresh and clean, honey-ish. Also make sure the wicks are pure cotton–many regular candles have heavy metal wicks (and I don’t mean they love Iron Maiden).

Have you used beeswax candles?

Aromatherapy Bath: Thyme is on My Side
archives most recent
More from Beliefnet and our partners
previous posts